We can certainly expect Ta’amu to someday be an NFL roster mainstay. 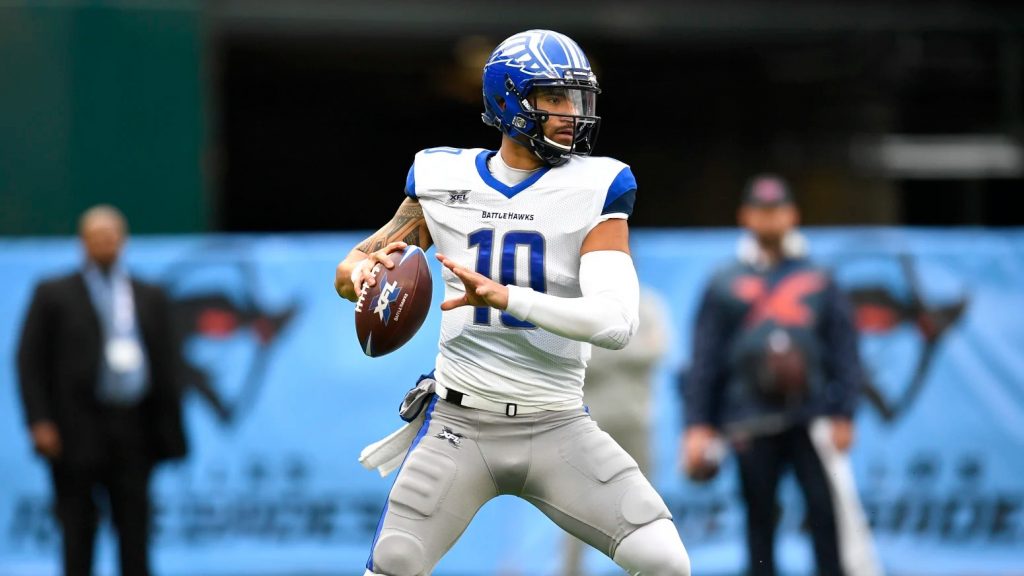 The Detroit Lions and Matthew Stafford both seem to want to part ways sooner rather than later. Stafford had expressed his disliking of the coaching staff and the higher-ups on a few occasions, especially after the Thanksgiving day blowout. So, if Stafford leaves the Motor City for greener pastures that would be leaving a gaping hole in the quarterback room. None of the guys have much experience in the NFL or ever looked great when they played beside the new signee Jordan Ta’amu.

Ta’amu looked awesome during his XFL tenure as a BattleHawk. He showed that he has a great arm, great escapability, and pretty good decision making under pressure.

Let’s start off with escapability, something Stafford does not have near as much as Ta’amu. The former BattleHawk’s signal-caller is not afraid to tuck the ball and run when he has to. If Ta’amu gets rocked on a play, he bounces right back up and keeps going and he is usually not whining to the refs or searching for a flag, Ta’amu plays old school football they way it was most certainly meant to be played.

The best NFL comparisons to the BattleHawk is probably either Deshaun Watson or Russell Wilson. Those are two very high-standard quarterbacks, and Ta’amu shows why his name should be with theirs anytime he gets the ball. Ta’amu at 5’11, 214 lbs, he’s not a big quarterback but he is a tough quarterback who can pound his way through defenders like Russell Wilson can any given Sunday.

In his five games, he rushed for 217 yards on 41 attempts and a touchdown. Ta’amu even had a 37 yard run on opening day against the Dallas Renegades.

Cannon for an arm

Ta’amu can air it out like the famous deep ball Stafford has had in Detroit for the past decade. Sure, he may not be able to sling it 75 yards in a single bound like Stafford, not sure any other NFL quarterback can match that, but Ta’amu can get pretty close to it.

Especially against the Seattle Dragons and Houston Roughnecks, he showed how his arm could play in the NFL.

Ta’amu can also pepper the ball in the air just like Patrick Mahomes. If you think PJ Walker was the only XFL quarterback is the only XFL that can whistle a ball down the field like Mahomes, you thought wrong. In college at Ole Miss, Ta’amu had the arm.

Sitting back in the pocket and mentally dissecting the defense or running if he sees a hole, that is what Ta’amu is best at.

You rarely see Ta’amu make a throw that makes you think, “Why would he throw that ball?” Everything he does is for a reason and can be seen why.

He only threw two interceptions in five games on 134 pass attempts.  Ta’amu throws an accurate ball, that could be seen by just about anyone who had the chance to watch him during his time as a BattleHawk.

Ta’amu’s final passing line as a BattleHawk was 97 for 134, for 1050 yards in the air, with five touchdowns and two interceptions for a quarterback rating of 101.3.  To put his quarterback rating into perspective, PJ Walker’s was a 104.4. So, Ta’amu proves he should be in the same conversation as PJ Walker once again.

The great thing about Ta’amu is he is still pretty young, turning 23 just last week. Knowing that, it was impressive of what he did in the XFL. Actually, Ta’amu was the only quarterback on the initial eight QBs selected by the XFL to never play a snap in a professional league.

With time on his side, Ta’amu definitely has time to sit down on the depth chart for a year or even two if need be. He should be treated almost like a drafted rookie quarterback, which he practically is, since he is younger than some that were in last year’s draft including a full year younger than the first pick of the 2020 NFL Draft.

Landing with the Lions

Does it seem that the Lions done with Stafford? It doesn’t seem so, since they fired the coaches as opposed to letting Stafford walk. Ta’amu may have to wait until Stafford’s contract is up after the 2022 season, which would make Ta’amu 25 years old and still very much in his prime. It is definitely worth it to stash Ta’amu, and even have Ta’amu learn behind Stafford to get his deep ball closer to Stafford’s.

On the business side of football, we probably weren’t going to see Ta’amu start anytime soon, being how much Stafford is being paid to play, and Ta’amu not having NFL experience. Hopefully, next year the preseason will make a comeback and Ta’amu should get some snaps to prove himself. He is behind Chase Daniel, one of the better backup options in the NFL, who is 34, and probably won’t be around much longer. The other being David Blough, who looked alright when he had time, but Ta’amu looks better when given the opportunity.

We can certainly expect Ta’amu to someday be an NFL roster mainstay. In all honesty, he and PJ Walker should always be in the same conversation, and Ta’amu will prove it when he gets his shot to take snaps at the NFL level.

Keep in mind, Ta’amu is on the Lions practice squad, and if an NFL team needs him for a 53 man roster they could snag him quickly.

WANTED: Reader questions for all-new XFL Mailbag!
King says XFL restored love of football, but ‘I know I belong’ in the NFL