Could we see The Rock in an XFL game?

Could Dwayne Johnson do it? Should he do it? Would he be allowed to do it?

In an Instagram post last week, Dwayne “The Rock” Johnson teased how he may strap on the pads and play in the XFL, a football league he now owns.

“I was a good football player with great ‘upper body violence’ as my coach, Ed Orgeron loved to call it 😈💪🏾, so maybe I’ll be the first owner in pro football history to actually suit up and play in the game,” Johnson commented.

He followed up that statement with a disclaimer, “No doubt, I’ll get my ass whupped 🤣but at least I’m goin’ out on my shield – XFL style🛡.”

Fans ate it up, which was probably the response the post was designed to create. But, we are now wondering if there may have been more to this post.

What if The Rock actually intends to live out his dreams and play even a few downs of pro football?

We did a quickie Twitter Poll and discovered that most fans are sure “The Rock” was “just teasing” with his post.

We would like to point out that The Rock never said he was teasing. It was the media that framed the post as a “tease.”

Keep in mind both Dwayne Johnson and Dany Garcia have been using social media to post “teases” about the XFL in the past weeks. However, every one of their teases has pointed to something real, or something we might expect to happen. Why should we consider this tease to be different?

Doesn’t that imply he will be doing it?

Could Johnson do it?

Born May 2, 1972, Johnson is 48 years old. If he played, he would certainly be one of the oldest to strap on a pair of football cleats. In reference, Drew Brees and Tom Brady are both in their early 40s, and they are quarterbacks, a position that requires extreme athleticism and can be punishing.

Almost thirty years ago, Johnson was a promising college footballer, receiving offers from many Division I programs and landing as a defensive tackle at the University of Miami. His claim to fame was being part of the national championship Miami Hurricanes squad in 1991. After graduating in 1995 with a Bachelor of General Studies in criminology and physiology, Johnson found himself in Canada, trying to make the roster of the Calgary Stampeders. When a starting position in the CFL was not in the cards, Johnson came back to the states to begin a wrestling career that became his mainstay for many years.

All things considered, Johnson has played football before, so he could do it again. He is definitely more fit than your average 48-year old, he knows a lot about his body and knows how he would have to prepare for football. But, is he as quick as he was in his young days? Probably not. This is where he would have problems hitting the field in a real game situation.

After a few downs of XFL football, Dwayne Johnson may be quoting a Danny Glover character line by saying, “I’m too old for this $hit!.”

But, it is probably clear that he could do it.

Is this a trial balloon?

Okay, I know. I may be splitting hairs here. But, I find it hard to believe that the words in Johnson’s Instagram posts are not crafted with the help of professionals and vetted before they go live. There is usually meaning and intent in these posts. 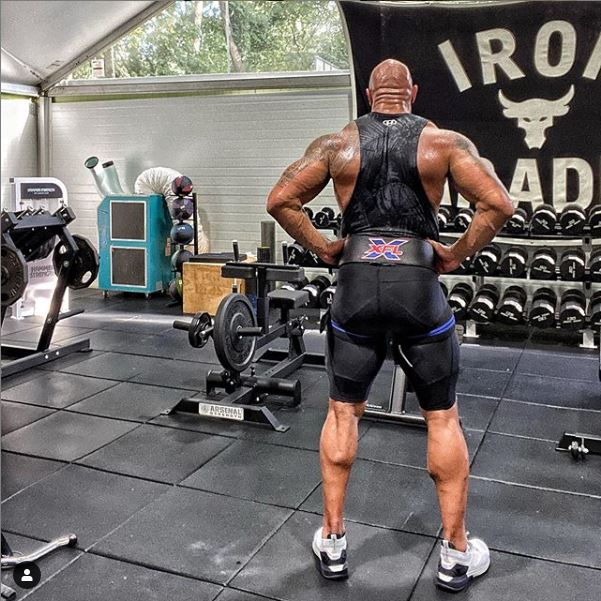 For example, Johnson’s post included a photo of his muscle-bound self wearing a brand-new XFL weight belt. Not only does this show he is serious about how he feels about the league, it shows that he is as fit as a fiddle, and more importantly, it was a staged photo done by a professional. That’s right, the photo’s lighting and focus shows that it was taken professionally. Notice the crossed shadows of Johnson’s legs on the floor beneath him. This indicates that professional lighting was used, with a key light and fill light. Again, why not? It’s “The Rock,” and inferior photography won’t do!

The point is that this was not a quickie photo done in the gym with a passing thought attached to it. The post was designed to send a message and elicit a response.

What if Johnson is testing the waters? Is he doing something akin to sending up a trial balloon? He might be putting out the idea of him playing, and see if it sticks.

He can now gauge the response from his movie fans, football fans, and others, such as the people he works with. Might an outpouring of fan support cause “the Rock” to carry through with his “tease” and strap on the pads?

Every one of Johnson’s fans knows of his personal story of a football career cut short. “The Rock” often brings up the story, and even refers to the $7 he had in his pocket when he left his last pro football job, which was where “Seven Bucks Productions,” the name of his production company, was derived.

For this reason, fans may want to see Johnson head onto the football field as a final coup de grâce to his story of pro football failure. To borrow a wrestling term, it would be the finishing move that “The Rock” needs to end his match with football, i.e., “I beat it and now I own it.”

Should Johnson do it?

Unfortunately, if this is how it is planned, it may seem more like the contrived moments that fans rejected in XFL 2001. More important, XFL 2020 proved how today’s football fans are looking for a level of serious football played by real players, and without gimmickry. Some would surely see “The Rock” strapping on the pads and coming onto the field for a set of downs as a pure gimmick.

“The Rock” should ask his buddy Vince McMahon what happens when you mix football and gimmicks.

You can be sure Johnson would not plan to go on the field in the last plays of a game that was already decided. That worked for Rudy, but it probably would not work for “The Rock.”

Certainly it would be less gimmicky if Johnson were to practice with the team, run the same drills as the other players, and joined the team for an entire game.

But would Johnson be allowed to do this?

Would Johnson be allowed to do it?

First of all, a healthy Johnson is a valuable commodity, especially considering the amount of movie and television projects in which he is currently involved. Losing “The Rock” to a football injury would literally cost millions of dollars in production costs.

Currently on the set of his upcoming Hollywood production Red Notice, Johnson has one of his regular stuntmen, Myles Humphus, do all the heavy lifting. Johnson could probably do many of the action stunts himself, but even a temporary loss of his skills due to injury would set back an already busy production schedule.

So, even if he has the desire to play, Johnson may not be allowed to hit the football field. 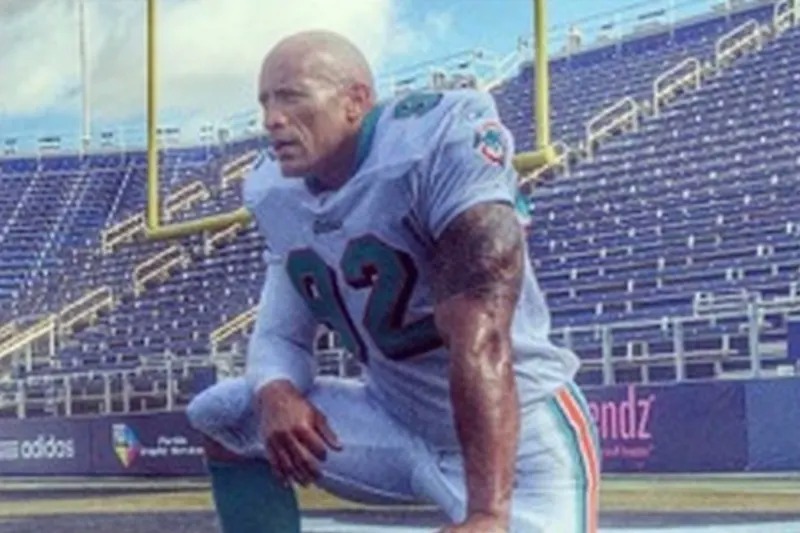 The Rock as a Dolphin – Ballers Teaser

So much can be read into Johnson’s recent comments. Now that we have laid it all out for you, what do you think will come of this?

In 2015, Johnson posted a teaser of himself in a Miami Dolphins uniform to promote his upcoming series Ballers. What can we take from this? Either Johnson has a long history of teasing his fans, or he really likes to see himself in a football uniform.