Cole Boozer: XFL Fan favorite on and off the field

Cole Boozer is ready and able to come back to the players league, for the love of football. 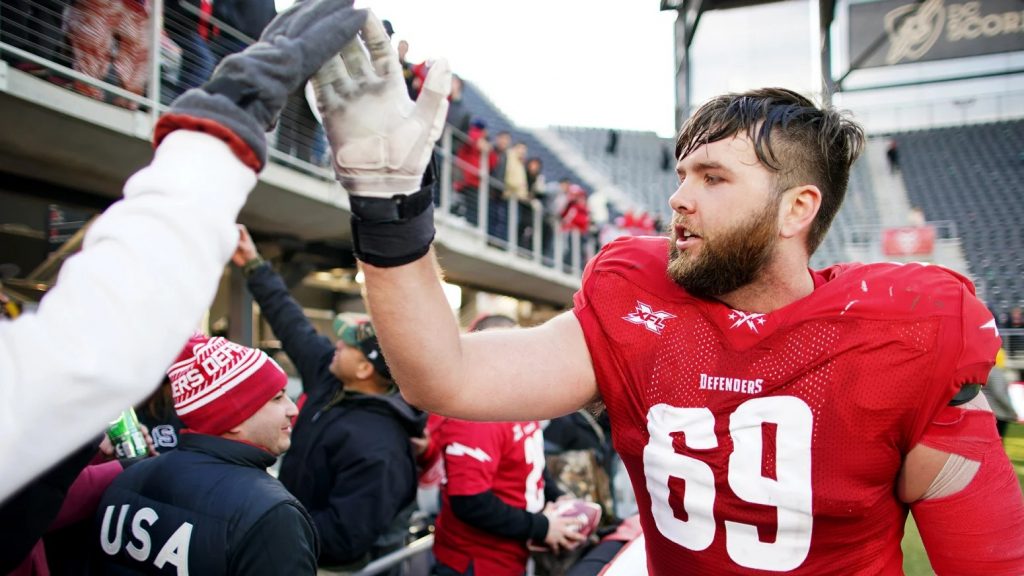 Sitting at his new Razor computer, Cole Boozer is probably either streaming Call of Duty or Fall Guys. After the XFL shut down in April, Cole has taken up streaming which is really only interrupted by his eight week old chocolate lab named Moose.

As a kid, Cole’s mom, Kathleen, did not want him to get into trouble, which is where his love for video games came from.

“In high school, my mom didn’t want me to go to parties, so I played video games a lot when I wasn’t working out or doing schoolwork and eventually that is why I got into streaming,” said Boozer.

Boozer was an offensive lineman most recently for the DC Defenders in the XFL in 2020. Popular for his last name and his jersey number, 69, Cole won over the hearts of fans and of teammates for his protection of quarterback Cardale Jones.

Before becoming a fan favorite in the XFL, Boozer was actually not even an offensive lineman in high school. Cole starred at Loyola Blakefield as a middle linebacker. Sitting at 6’4 and 200 pounds, Boozer ran a 4.6 40 yard dash and had the eye of scouts all across the country.

Once Cole accepted a scholarship offer to Temple University, it was not even his football tape that got the attention of the coaches at Temple.

“I loved Rugby. They (Temple) asked for some film of me, and I showed them my Rugby film and I scored two times at fifty and one over thirty meters,” said Boozer.

Clearly, Boozer was a versatile player coming out of high school. After being grey shirted before his freshman year, Cole was brought in to play during camp in August and eventually made the transition officially to offensive line and tight end.

After serving as a situational tight end his first two years, Cole made the official switch to offensive line his junior year. Although he was now a lineman, Boozer still kept number 87 because of his consistent looks as a tight end.

While he was at Temple, Cole played with the quarterback who would eventually set the XFL on fire, PJ Walker.

“That guy is a true competitor. That is how he has been his entire career, he is a beast. Deserves to be in the NFL, works really hard, does as much as he can for his teammates. Lamar Jackson type leadership,” said Boozer.

After having success at Temple with PJ Walker and other Temple players who have made their way to the NFL, Boozer went to Tampa Bay to try his luck in the National Football League.

Boozer spent all of 2018 with the Buccaneers, but was eventually cut after the 2019 training camp.

“It was unfortunate but with the coaching change, I got hurt in camp and I tried to be tough but twisting your knee during camp is hard to overcome,” said Boozer.

Now that Cole has spent some time resting after the XFL 2.0 ended, he is looking for new opportunities wherever they may come.

“I have just been working out and getting back into shape honestly. We have had some interest from a few teams and I am waiting for a call,” said Boozer.

Cole provided significant stability on the offensive line for the Defenders during his time in DC. Not only his versatility knowing the defensive side of the ball from his time as high school, but also being able to know the tight end roles in packages helped tremendously as well

But if the XFL does return, will Cole come back?

“I’m back in it, I am ready to go. I would love to play for the DC Defenders again, said Boozer. “I think the new league with the Rock will be huge. How he is as a person, how he is as an actor, how hard he works, that will be incredibly important for the league.”

But in the meantime, Boozer will continue to stream, continue to take care of his puppy and continue to be himself no matter what.

“I am pretty open. Me showing who I am as a person on social media will show the real thing. One time when I was streaming, I had someone come over to do something around my house and he knew me from my stream,” said Boozer. “ It was so cool because I do this so I can interact with other people right now, especially with everything right now it’s really important I think. Humans need interaction otherwise they go nuts. Now I have my puppy so I try to take care of him now too.”

No matter if the XFL is in a bubble or if Cole can spend time with the beer snake fans in DC, he is ready and able to come back to the players league, for the love of football.

XFL BattleHawks kicker Taylor Russolino is looking to take a shot at the NFL
Assessing the progress, prospects of XFL players in NFL training camps (Pt. 1)