Hopefully, Tripucka gets an NFL shot. If not, we may enjoy seeing him back in the XFL smashing punts. 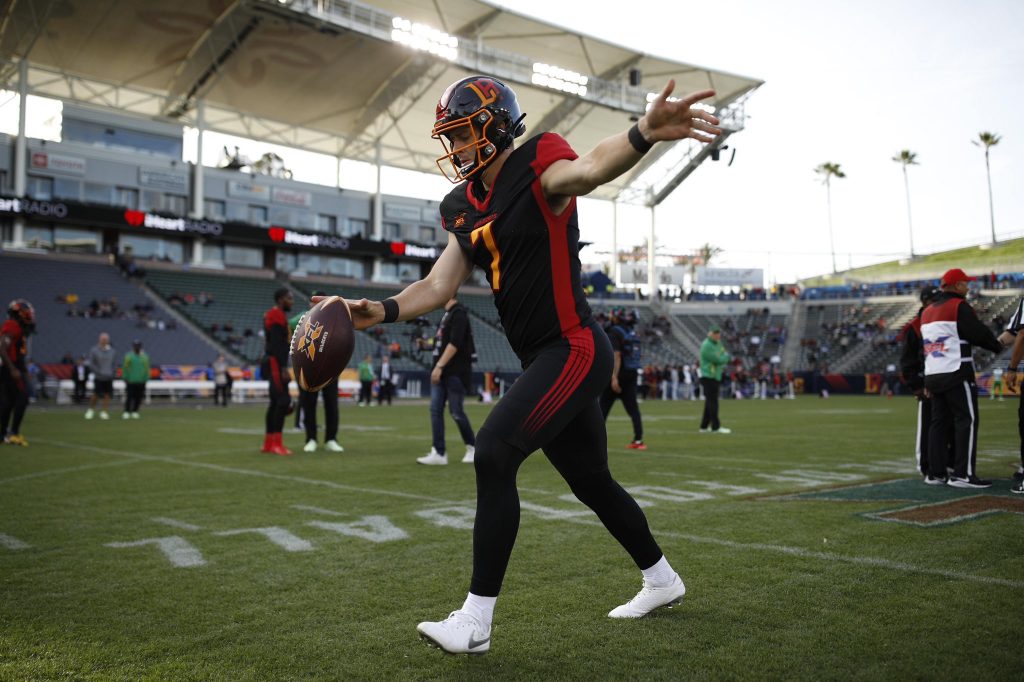 Los Angeles Wildcats punter Shane Tripucka had good punting statistics, but he seemed to fly under the radar.

Taking it back to Tripucka’s college days, he played at Texas A&M, one of the bigger college football programs there is.

“Playing at Texas A&M definitely prepared me for taking the next step to the NFL and the XFL. Week in and week out you are playing NFL talent and going face to face with guys who are future pro bowlers or high-level draft picks. I would say being at a school like that or in the SEC really prepares you for the speed of the game and how to conduct yourself as a professional. My ST coach at the time Jeff banks was one of the biggest reasons why I believed I had the opportunity and was really to play professionally. He taught us how to prepare and conduct ourselves as pros, and I feel like that was a huge part of my successes,” Tripucka said.

As he said, the SEC prepares you for everything, and it sends many players into the NFL every single year. Texas A&M is even the alma mater of former number one draft pick Johnny Manziel.

The Wildcats signed Tripucka after the XFL Draft, as he was passed over during the draft.

“Getting signed in the XFL was extremely gratifying for me. While the league was still building itself before It started I didn’t really know what to expect. As the draft got closer, I felt like I had a really good shot at being selected. Unfortunately, I was passed up and didn’t get selected in the initial draft. This was tough for me and really pushed me to continue to fight and stay ready. For various reasons, LA called me and wanted to bring me right before the season started. I was brought it only a few days before the first game, so I didn’t really have time to reflect on how it felt to get signed finally, but I tried my best to soak it in as I went. It was an awesome experience that I am so glad I got to be a part of even if it was only for a few short weeks,” Tripucka stated.

His punting stats were highly overlooked. He never had a touchback on his 17 punt attempts, along with seven of his punts landing inside the 20-yard line.

“I learned a lot from the XFL. In almost every part of the game or our day to day lives. It’s not easy, there’s a lot of adversity such as having to live in a hotel for weeks, get accustomed to a new place and people, facilities are not NFL or Texas A&M facility’s, etc.,” Tripucka remembered. “It’s not as glamorous as being a part of an NFL program but it definitely gave me a lot of opportunities to learn and I’m extremely thankful for what it gave me. I would say it taught me how to respond. No matter the circumstances, just keep scratching and clawing your way to where I want to be no matter what is thrown against you.”

Another underrated trait that Tripucka has, it’s actually as a holder. He has quick hands and reactions which are key to being successful. There was a couple of snaps that were wild but he kept them all under control.

As a member of the Wildcats, Tripucka certainly had a lot of great memories and a good time, but he remembers one game the most.

“I think my favorite memory from the XFL game was our game in New York,” Tripucka said. “Even though we didn’t win the game, it was such an awesome experience for me because I grew up a huge New York Jets fan, and it was the first time I had gotten to play in that stadium. It was just a great experience having to fight the elements and the cold winds all game, and I was lucky enough to have a lot of my family be able to come to see me play. It didn’t end the way we wanted, but it was still an awesome memory.”

Playing on the Wildcats helped Tripucka get even better. The camaraderie of an XFL locker room is much different from the big college setting and the NFL, where he played as a Los Angeles Charger.

“Getting to play for the Wildcats was an extremely refreshing experience. I quickly realized how much different this league and players were from other levels of football. It truly was a league built for the love of the game. I walked into a team of guys who were in the same position as me, just scratching and clawing for another chance to play. A lot of times at other levels or other teams there is a lot of big egos and it changes into something guys are doing for themselves or a paycheck. I have told many people this, but I was actually so surprised when I showed up the first day and guys were coming up to me and introducing themselves and wanting to get to know me and help me out. I’ve been to a lot of places/teams where you’re just seen as a guy trying to take someone’s spot and no one really wants to help you or get to know you. It was extremely refreshing to be apart of a team whose players genuinely cared for each other,” Tripucka shared.

That is what the XFL is all about! Guys like Tripucka just striving to make professional football their lives, and perform to the best of their ability every single day.

Knocking a little rust off. Let’s just say this was the first try… pic.twitter.com/OfHhjsNkLw

Now, Tripucka is hitting some kicks off the sticks too. He is strikingly good at it too, hitting light posts is not the easiest thing to do. By adding that to his film, that most definitely would give him an edge over his competition.

“There are a lot of guys I like to model my game after. I try to not just look at one guy and do what he does. I really try to pick out certain things many successful players do and figure out how I can apply that to my game. A few guys for example are Thomas Morstead and Johnny Hekker. Those guys have been doing it at an extremely high level for many years and are doing things to other guys that aren’t to separate themselves. But I wouldn’t say I pick one guy and model my game after them, I feel like I’m a unique punter and I have my own strengths that can separate me from the rest,” Tripucka explained.

Tripucka has the right mentality and motivation. He is always locked and loaded and ready to show why he deserves that professional shot over the next guy.

“For me staying ready is all about staying in my routine,” Tripucka said. “I try to keep the same mindset of you don’t need to get ready if you stay ready. I am lucky to be able to work and coach right now at Performance Course (PCnowisthetime) in the Dallas area. This has been an awesome thing for me because I get to keep training and chasing my goals with some awesome people and coaches here but I also get to help coach the younger generation through the same programs I have gone through from middles school up to the NFL and XFL. I have also been able to keep kicking and working on the technical side of punting with my kicking coaches Rocky Willingham (@Rockyrwks1) and the Guys at One on One Kicking (@OneOnOneTX) here in Dallas. A lot of it has been the same stuff as far as my routine goes. it really involves a lot of just staying after it and staying patient.”

There is always a ton of film to see Tripucka smashing footballs to the moon, the ball just sounds different when he hits it. It kind of has that unique Sebastian Janikowski sound like the ball is exploding.

Tripucka is ready for the call when asked he said, “Heck yeah I would! Again, that’s my biggest thing. You don’t have to get ready if you stay ready. I have a lot of great people around me that help me every day continue to prepare if something happens and I get a call.”

At the moment Tripucka is somehow still a free agent, there is no reason for him not to be signed with a team. At the absolute bare minimum he should be on a practice squad in case your starting punter would go down. In reality, though, Tripucka has the skills and the right mindset to playing every week.

“I would LOVE to come back in play in the XFL again if the opportunity arises,” Tripucka said. “My main goal is still to play in the NFL and always has been. It’s crazy with everything going on and there’s a lot of uncertainty but I will continue to fight and pray that I can make my way back. If the XFL is that stepping stone to help me get to where I want to be then I’m all for it. I just want to play this game and I believe I have what it takes to be successful in any league. I’ve always believed in myself even if those around me haven’t. I think that is the biggest thing for anyone. You’ll always have people around you telling you that you’re great and somethings coming or just to be patient, but at the end of the day all that matters is that I believe I am capable of playing this game and that’s all that matters.”

An XFL return would be great for the former Wildcat but obviously, the goal for any football player is the NFL. Hopefully, Tripucka gets an NFL shot. If not, we may enjoy seeing him back in the XFL smashing punts.