Can the Hitmen Attract Fans? 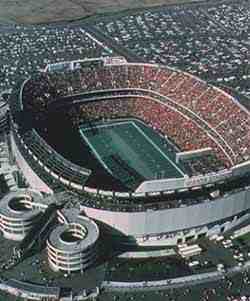 With the success of the Yankees, Mets, Devils and Giants, is there enough adrenaline left in New York/New Jersey area to fill Giants Stadium (77,716 capacity).

(30 January 2001) – With the incredible amount of success that the NY/NJ area has had this past year in sports, can the Hitmen attract the fan base they will need to survive? With the success of the Yankees, Mets, Devils and Giants, is there enough adrenaline left in New York/New Jersey area fans to embrace a fledgling team? The general feeling in the Northeast is that people are a bit skeptical, but more so they are excited about the start of a new league in the area.

I spoke recently with Bill Donnelly a well respected football man in Massachusetts, and posed these same questions. Mr. Donnelly was the senior quarterback for the 1950 Worcester (MA) Vocational High School Mechanics, a group that went undefeated under the shadows of the football rich Holy Cross College area. Bill also played for the only semi-pro team in Worcester, the Worcester Beavers 1952-53. He told me that fans in the Northeast are embracing the fact that they will now be able to watch pro football immediately after the Super Bowl Champion is crowned. Many years ago, before the then AFL Boston Patriots came into existence, the New York Giants were the team that most NFL fans followed in New England. Mr. Donnelly says that he can feel the same type of atmosphere growing in the area again. “True football fans love to see football, whether it be high school, college or pro, and the mere chance that a new league can keep thier passion afloat during the winter is very appealing,” said Donnelly.

Stories have popped up in local papers throughout the New Jersey area, that show the fans are intrigued with the new league. While New Jersey lives in the football shadows of New York, even though New Yorks teams play in New Jersey, the fans are happy to have their state listed next to a pro football team. If the league is able to take off and stay financially stable, as Vince McMahon predicts, the Jersey area fans are willing to give the Hitmen the support needed.

Only time will tell if the New York fans, spoiled with success and tradition, will have the testosterone to keep the juices flowing for another season, but indicators point in the direction that if the league itself can keep the level of play at a high level, the fans will reach down deep for the ferocity of competition once again. The pressure is on Vince McMahon and the league.