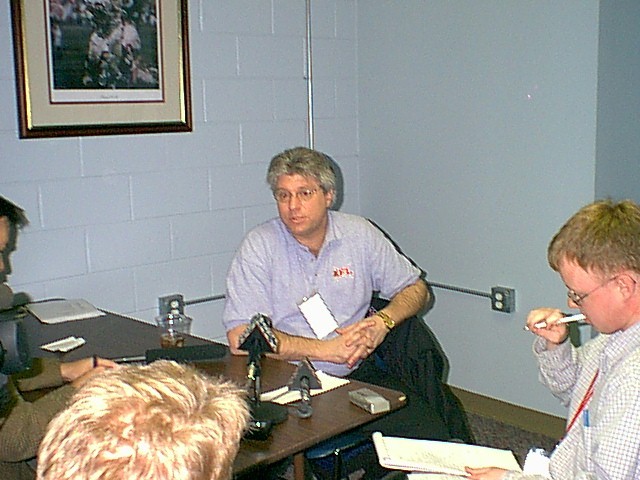 Birmingham – (15 May 2001) —News of the death of the XFL hit hard in Birmingham. The staff was finally making some inroads into local public life. The cheerleaders had starred in a leather modeling show at a Harley Davidson shop and they were scheduled to be a sponsor at a local crab boil. The coaches were out looking for players who could “actually play” and Berryman and his marketing staff were analyzing the responses from the season ticket holder survey.

Then the news came. McMahon was folding the league and all the hopes and dreams of making the Bolts a fixture in Birmingham came to a bitter and sudden end.

I feel especially bad for the people who worked for the Bolts. These were not junior executives who are going back to their old jobs at the WWF. These people left good jobs from all over the country to come to Birmingham to work for the Bolts and were promised a minimum of 3 years. Many people felt the corporate strength of NBC and the WWF would provide the financial backing necessary to make this work.

In fact the corporate backing was nothing more than a sham.

What we learned from the XFL:

Contracts are not worth the paper they are printed on

NBC had a “contract” to televise the XFL for three years. During the season when ratings began to slide they backed off to 2 years. Before the end of the season they blatantly said they were through with the XFL and they would not be back. I’m sure some lawyer buried some escape clauses depending on ratings but from the layman’s point of view the documents they so proudly boasted about were simply worthless.

Salesmen always tell you what you want to hear

First and foremost Vince McMahon and Basil DeVito are salesmen. When in Birmingham DeVito sat there as straight faced as mother Teresa and told us that Birmingham had nothing to worry about. “The ThunderBolts will be in Birmingham for a long time”, “We are in this for the long haul”. This we heard from day one and from day one this was nothing more than a sales pitch.

Vince is a good salesman

Anyone who knows anything knew that to create a football league from scratch would take someone who loved the game and was willing to dump millions of dollars into it for many years to get it going. Vince convinced us all that he was just such a man. In the end the truth is he is simply a servant of the corporate machine. Stock price and market share figures dictate his actions just like the NFL suits he criticized.

The WWF changed our concept of what football could be

One thing the XFL promised was to provide the best football game day presentation in the world. This they did to excess. Almost all of their on-the-field innovations worked far better than anyone had hoped. The Bubba Cam, the built in Microphones, the opening fight for the ball, the no fair catch rule, the overtime rules, the extra point rules, the speakers, the jumbo-tron. It all worked; In fact it worked too well. The fact is that if college and pro teams don’t adopt the majority of this stuff and do it now I just doesn’t know if I can stomach “your fathers football” any more. It’s just not exciting enough.

Football isn’t about attendance or fans; it’s about TV ratings

In the early history of Pro Football the league survived mostly on gate receipts. At some point the TV networks began to cover the sport and pay big bucks. The players wanted a cut and negotiated the collective bargaining agreement. Since that time salaries have been going through the roof and fans became an irrelevant piece of the puzzle. The networks and their relentless drive for ratings call the shots. And their money does all the talking. Don’t confuse fans with ratings. Even if every soul in a major city watched the team on TV it would not be enough. It takes people from all over North America to garnish enough rating points to make the network folks happy. Therefore if Chicago or New York had an empty stadium yet pulled enough numbers on TV everyone would be happy.

There aren’t that many real football fans

I make a distinction between casual football fans and real football fans. Casual football fans like football but usually follow one or more other sports as well. They “skim” the surface of “fan-ness”. They are extremely interested in big names and big games. Their interest peaks when there is a playoff matchup or a major record to be broken. The XFL provided little or nothing for these casual fans and they are far more numerous than the hard core fanatics. The hard core football fans usually do not follow any other sport to a great degree. They love the concept of the “team” sport where no man is as great as the “team”. They delight in a collection of no-names like the Baltimore Ravens winning a superbowl. They don’t care about the names on the jerseys but the instead focus on the fire in the hearts of the players. These are the folks that Vince McMahon thought would love the XFL and he was right about that. But he was wrong in how many there were. There were in fact very few.

I said early on that this was probably Birmingham’s last chance at pro football. There are a number of reasons for this. Birmingham has been falling behind other major cities like Atlanta, Memphis, and Charlotte in virtually every measurable category. That trend will likely continue. Birmingham has major logistical problems that are getting worse not better. The crumbling infrastructure of the old Birmingham is where the facilities are that handle sporting events. But the money and the population are moving further south to the Hoover and North Shelby areas. The people of these areas were willing to go into the city to watch Stallions of the USFL back in the 80’s but in the 21st century they have proven unwilling to travel downtown to an ever worsening inner city.

The financial realities of creating a pro football league from scratch may be impossible to overcome. If you remember before the government broke up the Bell Company it was simply a financial impossibility to compete with the Telephone Company. The government recognized that this was a bad thing and broke them up using the anti-trust laws. The USFL came ever so close to defeating the NFL 16 years ago by putting a product on the field that rivaled the older league and actually defeated it in court using these same anti-trust laws. However by some twist of fate that will never be explained legally they were found guilty but never punished. This is proof yet again that rich men never lose in court. The spectacular death of the XFL along with the previous attempts will most likely serve as a stern warning to any would-be competitors to the NFL.

I will not use this forum to vent the anger I hold toward Vince McMahon and the WWF. I have learned as I have gotten older that until you have walked in a mans shoes you cannot stand in judgement. Just a few weeks ago I stopped by the Bolts merchandise booth at the mall and bought several items including a bumper sticker. I was so proud to have it on my truck.. I hoped by showing my support that others would find it easier to support them the following year. I looked down at the sticker while gassing up. I felt a deep hurting inside my heart as a childhood dream died a painful death. I ripped the sticker off and wadded it up and threw it away. I think part of the little boy in my died that day.