Breaking Down the XFL’s First Trades

We just got a taste of the first trades by four of the franchises.

The past few months have been filled with historical events from the league announcing its return to announcing team names to its first draft. Thursday was different though. We saw our first trades in the league’s history.

This week, news came out about the LA Wildcats making some cuts to its roster so this week seems to be the first round of roster moves made by all eight teams. We got a taste of the first trades by four of the franchises.

This trade was actually made on December 11th, but not announced until Thursday so this is the official first trade in XFL history. Both the Wildcats and the Vipers decided to swap defensive tackles in Leon Orr and Trevon Sanders.

Orr heads back to his home state of Florida where he played at the University of Florida. He proved to be a force in the middle of the defensive line against the run while also showing he can get to the quarterback as he recorded 4.5 sacks and 13 tackles for loss in four seasons. He bounced around between NFL teams with the Raiders and the Dolphins. Earlier this year, he joined Steve Spurrier in Orlando with the Apollos in the Alliance of American Football where he recorded ten tackles in eight games. Orr will have to compete with Ricky Walker, Giorgio Newberry, and Josh Banks in training camp for roster spots.

Trevon Sanders was dominate during his time in college with Troy where he recorded over 100 tackles, 16 of them for a loss and six sacks from the defensive tackle position. Sanders was on the New York Jets in the NFL before getting drafted by the Vipers in the XFL Draft. He was expected to be competing for a starting job over in Tampa, but with the roster changes the Wildcats have been making, he might have a chance to make an impact on the defensive line. Under the leadership of a defensive-minded coach like Winston Moss could help him develop through training camp. 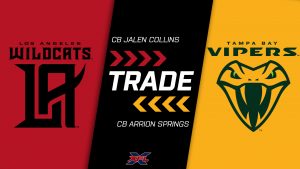 They must have enjoyed their first trade so much that they decided to work together again on another trade involving their defenses. This time both teams wanted to make a move in their secondary.

Despite not known for being a ballhawk, Arrion Springs possess great coverage skills as he was a strong tackler at Oregon where he recorded 137 tackles, two interceptions, 44 pass deflections, three force fumbles and one fumble recovery. Springs has NFL experience as he bounced around between the Kansas City Chiefs and the San Diego Chargers. He will be another new defender who should benefit from Moss and will compete with what is a young cornerback room.

Jalen Collins is another example of a surprise roster move by the Wildcats as he was predicted by many to be the veteran leader of the defense with his experience in the NFL with the Atlanta Falcons where he saw playing time during the 2016 season with two interceptions in eight games played and led the team in tackles in their Super Bowl loss to the New England Patriots. He is one of the most experienced players in the league and shouldn’t have any trouble making the Vipers roster. He does have character issues as he was suspended four times during his NFL season. This could be his chance to prove his worth and be one of the best pass defenders in the XFL. 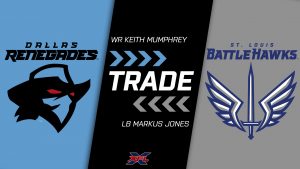 The Renegades have one of the deepest receiving cores in the league and with so much speed and talent on the roster, it’s no surprise Dallas decided to take advantage of their deep depth chart and find ways to improve other parts of their roster.

The rich keep getting richer for the BattleHawks as they add to their own deep receiving core that includes NFL veterans Quinton Patton and Terrance Williams. Mumphrey is known for his great play at Michigan State where he caught 88 balls for 1348 yards and seven touchdowns in his college career. He has great speed and looked good during mini-camp as he was able to get good separation from corners during one-on-one coverage. He could fill in at the slot for St. Louis if he was able to win a roster spot. His speed also makes him an asset on special teams with returning experience with the Houston Texans as that could be his ticket to make the team.

Markus Jones is no slouch player as he was one of the best defensive players in Division II football Angelo State where he was named National Defensive Player of the Year as he recorded a school record 17.5 sacks and had a career mark of 37 sacks. He was picked up by the Baltimore Ravens before making his appearance in the XFL. He’ll be a perfect fit in Chris Woods’ 3-4 defense as he has a ton of speed that can be utilized on the outside pass rush. He has a knack for hitting the quarterback and can play defensive end or linebacker so I expect him to be able to alternate between the two positions. This was a win-win trade for both teams.