Brandon Silvers: Why The XFL Helped Him 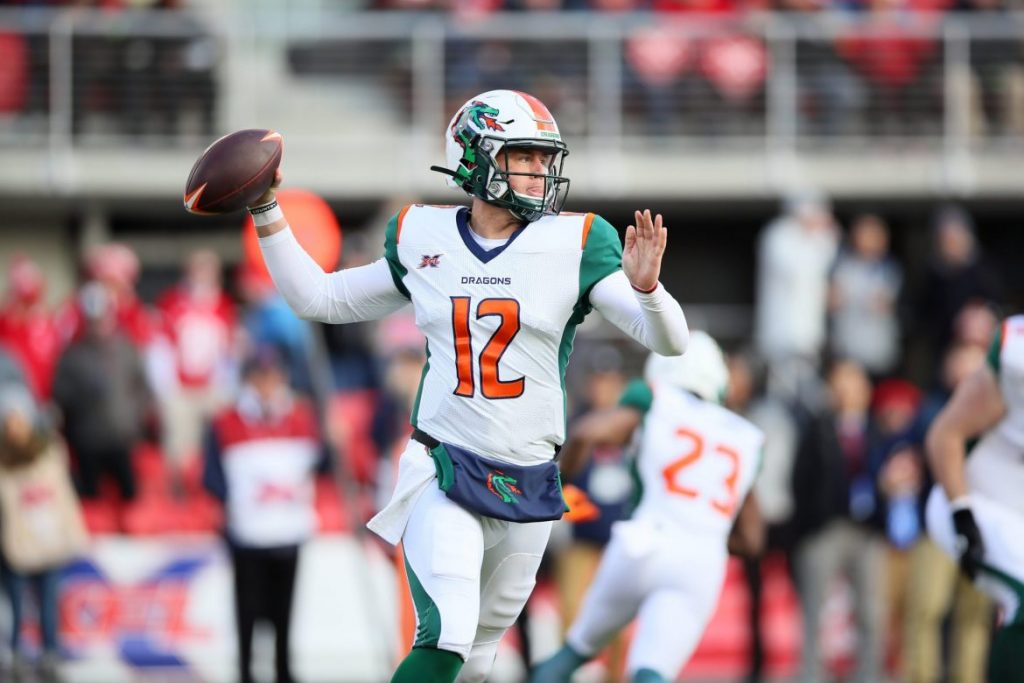 Brandon Silvers, the former Seattle Dragons quarterback, is one of the best candidates that played XFL and came out better. Sure, you may say his statline may not have looked the best, but he really did perform much better than it looked. First off, let’s take a look at the road Silvers had traveled before signing with the Seattle Dragons.

Brandon Silvers played his college football at Troy University in the small town of Troy, AL. The Troy Trojans play in the Sun Belt conference, which is FBS football, but one of the mid-major divisions. Silvers and his Trojans walked into Death Valley, the home of the Louisiana State Tigers, and walked off with a victory. The Trojans defeated the Tigers 24-21.

He wrapped up his time in the small town of Troy as a Trojan finishing second all-time in passing yards with 10,684 yards, setting a program record in touchdowns with 77. Silvers earned himself First Team All-Sun Belt honors as a junior in 2016. He led Troy to its best 11-2 record as well. He also earned an invite to play at the Reese’s Senior Bowl.

In the still young career of Brandon Silvers, he has had a few NFL chances. The first opportunity, right after going undrafted, was a great one. He was invited to rookie mini-camp for the New Orleans Saints, right in his own backyard of Louisiana. Sadly he didn’t the cut.

Right after that, the Philadelphia Eagles brought Silvers out to their camp, he was on the roster very shortly before pre-season but ended up being cut.

The only reason that we could see him not sticking with the Eagles would be their quarterback room was pretty full with Carson Wentz, Nate Sudfeld, and Christian Hackenberg. Silvers and Hackenberg would eventually meet again at their next stop as well.

Silvers ended up with the Memphis Express of the Alliance of American Football (AAF). He played alongside three former NFL quarterbacks two of pretty big name, Johnny Manziel, Zach Mettenberger, and Christian Hackenberg who just was with Silvers in Philadelphia.

Silvers earned the promotion to the starting role after Mettenberger, who was doing well, was injured. Hackenberg was the original starter, but he didn’t look so great, seeming like he didn’t have much confidence.

In the two games he started he threw 799 yards with four touchdowns and two interceptions. Silvers ranked third in the AAF with a 64.0 completion percentage and a passer rating of 86.1 as a first-year pro.

After his amazing bout in Memphis with the Express, he was signed to the New York Jets as a practice squad member, but he was later cut.

Now onto the moment we have been waiting for! Silvers gets his XFL chance, and with pretty high stature. Silvers was one of the initial eight quarterbacks that were assigned to teams.

He was assigned to the Seattle Dragons. Went up to compete with former Seattle Seahawks quarterback, BJ Daniels. Silvers won the starting role.

He played in the first two games before he was benched during the St. Louis BattleHawks game for back up quarterback former Seattle Seahawk, BJ Daniels. Silvers knows all about pressure because it seemed like the Dragons fans never gave him a chance in Seattle the fans would constantly be chanting for the Seattle native, BJ Daniels. In week three, Silvers had a 64-yard touchdown pass that really silenced the crowd.

During his four games he threw 539 yards, six touchdowns, and four interceptions and a 70.7 rating with a 52% completion percentage. Silvers performed much better than his stats show, even though they’re not even that bad. He handles pressure well, whether it be the crowd chanting for the back up, or for defeating SEC juggernaut Louisiana State in Death Valley.

Brandon Silvers deserves another XFL shot this coming year, that is if an NFL team doesn’t swoop him up first.