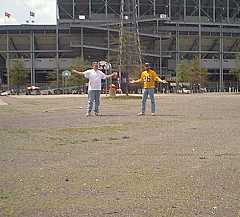 With a parking lot so empty why would tailgaters be asked to move to make way for parking cars? One thing we can say, is that the Bolt’s home games feature plenty of parking available right next to the stadium.
Photo: Bamaslammer

Birmingham – (9 April 2001) — Webster’s definition of “FUTILE”: Barren of Results, fruitless, ineffective, ineffectual, unprevailing, unproductive, useless, vain. All words that describe the Birmingham Thunderbolts. My favorite is the first one, “Barren of Results”. I like most people have a job. In that job I get evaluated at all times. If I were a complete failure at what I did I wouldn’t be doing it for very long? Although what I do is probably not as hard as coaching a football team it is what Coach Jerry Dinardo does and his efforts have been futile this year.

Some have said that this final game has no meaning with the playoffs out of the question but I felt otherwise. Perhaps nothing says more about a coaching staff than how they prepare a team for a game like this. If that is the case the news is not good for Birmingham because the Bolts played probably the worst football game I have ever seen at the professional level. Frankly they laid down for the Hitmen tonight. I wouldn’t be surprised if there were a bunch of SUV’s in the parking lot packed to the gills with stuff. The masked prognosticator really hit the nailed on the head when he guessed that most players simply wanted to get this season over with and go home.

I should have known things were going to be bad when we set up our final tailgate of the year. The sun was baking the ground on our first warm game day. Adjacent to our parking lot was a lone tree in the empty parking area next to the stadium. I along with several tailgating groups set up in the shade of the tree. Not long after we had our fires going the Legion Field staffers began to harass us. They claimed they needed the area for parking cars. We looked over the 100 square Yard empty parking lot in dismay. Even when over 36,000 showed up for game one this parking lot wasn’t filled. I looked up and said, “If you start filling this lot I will gladly move” He was not amused. He left but later returned and forced us to move. We abandoned our tree to make way for the massive crowds. I’m not sure what he was smoking or if he thought this was an Alabama game. The parking remained empty as it had all year long. 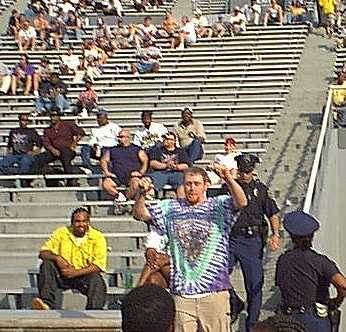 Apparently, telling the home team’s Coach that “he sucks”, will eventually get you ejected from the game.
Photo: Bamaslammer

As the game wore on a disgruntled Birmingham fan walked to the fence behind the Birmingham team and using a megaphone made from a cup he expressed his displeasure with what he was seeing.

No foul language mind you. He said and I quote “Jerry Dinardo, You Suck! You’re the worst coach I have ever seen!”

One of the Birmingham linemen headed for the fence to dismember the fan but luckily some other linemen held him back. The local police watched the entire thing and said nothing. Technically he hadn’t really done anything other than express his opinion, which is expected in pro sports.

However after a few minutes someone in security decided he was a troublemaker and an officer went to his seat in the endzone and escorted him out without incident. The “troublemaker” seemed ok with this. The Bolts were clearly done for the day. In fact the outspoken fan got a slight applause from the crowd. He was only expressing what we were all thinking.

With yet another abysmal crowd the community I call home has spoken. What are they saying? He who hath an ear, let him hear.

The Bolts are Terrible: The low attendance figures aren’t a message about the XFL specifically. Birmingham is a strong football market, perhaps the strongest per capita anywhere. The XFL TV ratings have been strong locally no matter who is on TV. Everyone loves the cheerleaders, the bubba cams the jumbotron. The game presentation is simply the best in the world. But the Thunderbolts team has been an embarrassment. Yes they won only 2 less games than Las Vegas but one of the 4 Las Vegas wins was against the Bolts and anyone can see that Vegas is only a few offensive players from playoff contention. Birmingham on the other hand aside from Quarterbacks and receivers is devoid of talent. The only two Birmingham victories came because of two fluke plays in which Birmingham’s defense scored a cheap touchdown in the waning minutes of the game. Absent of miracles the team proceeded to reel off 7 consecutive losses. Although the list of excuses is long and varied in the end it’s still big fat “L”. As the XFL is learning Alabama has little tolerance for losers and even less for football that is simply not competitive.

Jerry Dinardo is not qualified to coach: The hot topic in Birmingham before the season was whom would the Bolts get as a coach. Many ideas came forth. Many names with state ties were suggested. Others with NFL or CFL experience came up. The excitement in the air was wonderful. But the announcement of Jerry Dinardo was a shock. Dinardo had zero pro experience. He was familiar only because he was a college coach who was usually on the losing end of contest with local college teams Alabama and Auburn. Now that the Bolts have solidified their position as the worst team in the XFL and he has now secured his reputation as a loser in Birmingham. We didn’t want him to start with. Now we want the XFL to get rid of him.

Is the XFL listening? I don’t think so. In Birmingham News article this week Tim Berryman the Bolts General Manager was quoted as saying that they were going to employ a “grass roots” effort to sell tickets. Well I’m not the masked prognosticator but I can look into my crystal ball and tell you that with Jerry Dinardo at the helm you aren’t going to sell tickets in 2002. The curiosity factor won’t be there to give you a 36,000 head start in attendance. The only way you are going to sell tickets with Dinardo is to reel off a number of wins next year. If that were to happen you might get some good numbers late in the year. Anything short of that and 10,000 fans a game might be the best you will get. I see this as a critical test of the “single entity” sports league. If Birmingham had an owner he would no doubt fire Dinardo and his staff. Absent of any local representation will the league step in for us or will they simply view Birmingham as fodder for their other more prominent franchises. Although Birmingham is the smallest market in the league it doesn’t deserve to be ignored. At present I have heard nothing that indicates that Jerry’s job in question.

So that is it for 2000. It has been an interesting adventure covering this league and the Birmingham ThunderBolts. I had high hopes going in but those hopes have been tarnished by the stench of losing. The XFL has dug a virtual grand canyon sized hole here in Birmingham. It will take more than smooth talk and empty promises to get this franchise back on its feet. It will take action. And it better start immediately.