A game where not many things went well for the BattleHawks ended in a 15-6 loss to the DC Defenders. 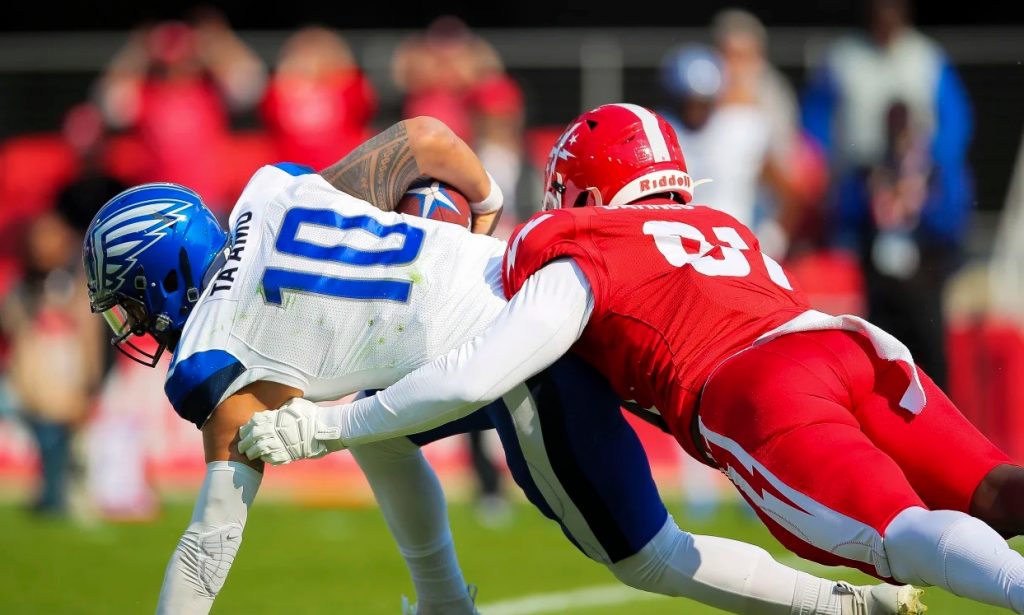 BattleHawks quarterback Jordan Ta’Amu gets dragged down during a matchup with the DC Defenders. (Credit: XFL.com)

WASHINGTON DC – A game where not many things went well for the BattleHawks ended in a 15-6 loss to the DC Defenders, both teams move to 3-2 on the year.

Coming into the week, DC was on the verge of their season having all the wheels fall off. While they might not have all their answers, their defense helped will them to victory. Before the end of the first quarter, DC head coach Pep Hamilton made a quarterback change pulling quarterback Cardale Jones after just two possessions. Jones went 0/2 with an interception.

This significant event would ideally be the writing on the wall for the BattleHawks to take advantage of the change at quarterback, they did anything but.

Kenny Robinson stepped in front of Cardale Jones’s pass keeping the ball off the turf. The BattleHawks offense took over with momentum on their side. The running back duo of Matt Jones and Christine Michael started the day strong driving 53 yards to the DC 11-yard line.

From this point on in the game, self-inflected wounds in the form of penalties with be the crux of the BattleHawks troubles the remainder of the game. A false start pushed St. Louis back 5 yards. An injury to Center Brian Fulkerts took him out most of the game and the offensive line struggled with pass protection all afternoon.

The opening drive building on all the momentum stalled out, and the BattleHawks would settle for a Taylor Russolino field goal.

On the ensuing kickoff, Russolino failed to kick the ball in the air past the 20-yard line. In the XFL, this results in a substantial penalty allowing the Defenders to start at the St. Louis 45-yard line. In his first series under center, new DC QB Tyree Jackson stepped up for the Defenders. What was once a pass heavy team turned predominantly to the run game. Jhurell Pressley would run it twice for 33 yards and Jackson capped off the drive with a 9-yard TD pass to Khari Lee giving DC a 6-0 lead.

From the interception momentum building drive ending in only a field goal to the new opposing QB marching right down the field for a quick and easy looking TD, the momentum of the game official shifted towards DC and the BattleHawks would play on their heels the remainder of the game.

The following St. Louis drive mirrored their previous drive. The BattleHawks moved the ball down the field, this time getting to the DC 17, before picking up another penalty for a false start, stalling the drive, and settling for another Russolino field goal. This tied the game at 6 and would be the last time the BattleHawks would add to their score.

DC would put together three additional drives ending in 3 points each behind the leg of Defenders Kicker Ty Rausa. Rausa finished the day hitting 3/4 field goals from 52, 50, and 22 yards.

Story of the Game

In his post-game press conference, Coach Hayes summed the day up well saying “We weren’t very good. We shot ourselves in the foot obviously with penalties, could never get a rhythm.”

The St. Louis offense is built off the run game, chipping away 2-4 yards each play setting up a manageable third and short situation. All year the offense has executed this successfully while leading the league in third down conversion percentage.

Penalty after penalty set the offense with a lot of second and third down and longs. The offense could not keep up nor did OC Chuck Long change his play calling to accommodate the setbacks. Coaching had its share of trouble today. Coach Hayes punted from the DC 39-yard line, the punt resulted in a touchback and the ball was taken out to the DC 35 yard line, a net of 4 yards on the punt. The XFL touchback rules are meant to encourage coaches to go for it on 4th down in those situations.

While players are ultimately responsible for the penalties they commit, it does reflect on the discipline and preparedness the coaching staff instills in them. Coach Hayes’s BattleHawks have been the most penalized team all year.

The offensive line struggled for really the first time this season. Ta’amu was rushed several times on the day with the offense relying on short quick passes that were quickly contained by the DC defense. Ta’amu had a season low 60% completion rate on 15/25 passing for 174 yards. The Defenders frequently got to Ta’amu reeling in 4 sacks on the day.

The receiving core didn’t offer Ta’amu too much support either. Tight End Marcus Lucas had only 2 catches on 6 targets with 2 drops. De’Mornay Pierson-El didn’t get going either, he had 2 receptions and had a net of -1 yards on the day.

Jones and Michael were more efficient in the backfield this week than last. Jones ran the ball 13 times on the day for 70 yards and Michael had 12 runs for 69 yards. Each back was able to pull off nice chunk plays frequently going for 8-12 yards before drives would stall.

The injury bug battered the BattleHawks on the day as well. Center Brian Folkerts would return to the game after suffering an ankle injury, good news for Ta’amu and the line if he is indeed healthy. Punter Marquette King suffered an injury on a blocked punt when his kicking leg jammed in the blocker, we are still waiting for word from the team on his status.

Long snapper Tanner Carew also suffered an injury. Carew’s absence was felt on the day when the new long snapper almost sailed the snap, King the holder was able to bring the high snap in, but the rhythm of Taylor Russolino was thrown off resulting in his first missed kick of the year.

In a game where the BattleHawks were poised to take a commanding lead in the East brought the team back to the pack. The East has a three-way tie for first with DC, New York, and St. Louis all sitting at 3-2.

The talent and game play for the BattleHawks remains solid. St. Louis isn’t facing an identity crisis or crumbling on either side of the ball. Largely from today, it was penalties and undisciplined execution that cost them the win.

The BattleHawks remain on the road next week traveling to Tampa Bay to take on the Vipers. The Vipers are 1-4 on the year and are coming off a tough loss in a shootout against LA after losing 41-34. Tampa has a ton of fight and challenged in almost every game on the year.

Fight and Fly on, BattleHawk Nation.