Taylor Heinicke is set to start for the foreseeable future for the Washington Football Team. 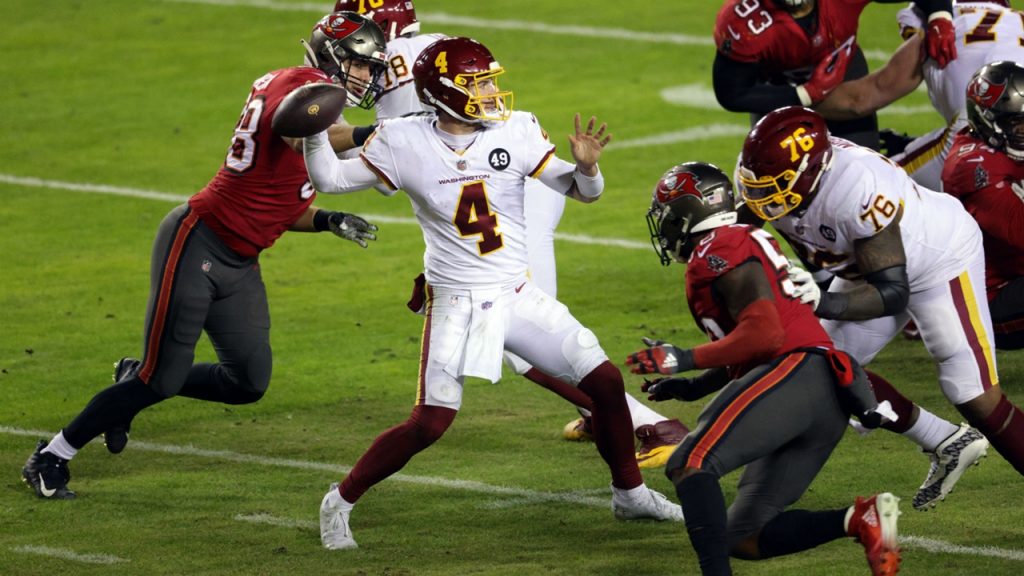 Turns out, it’s not just the NFL that misses on player evaluations.

The quarterback with the most NFL success out of the XFL’s 2020 season may end up being one that never took a snap. Taylor Heinicke is set to start for the foreseeable future for the Washington Football Team after Ryan Fitzpatrick suffered a right hip subluxation (an injury explained here) in the team’s first game. He was placed on injured reserve this week, meaning he’ll be out a minimum of three weeks, though it’s expected to be more.

Heinicke burst onto the scene last year in the nation’s capital, signing with the team in December. After Dwayne Haskins was benched and subsequently released, and injuries felled Alex Smith and Kyle Allen, Heinicke’s number was called. He started the team’s playoff game against eventual Super Bowl champion Tampa Bay Buccaneers, nearly knocking them off in a 31-23 loss.

Heinicke’s career, teetering on irrelevancy, was suddenly revived. He was rewarded with a two-year, $8.75 million extension in the offseason. For 2021, Washington brought in veteran Ryan Fitzpatrick to start, with Heinicke backing him up. Now, Heinicke has the reigns. If he’s able to play well in Fitzpatrick’s absence, Washington may well stick with Heinicke; Fitzpatrick is only on a one-year deal.

We’ve written about Heinicke and his story before on this site. But instead of being a one-off curio, Heinicke now has the chance to state his case to be the starting QB in Washington for this season and beyond.

Which brings us back to the XFL. The quarterback battle between Heinicke and Jordan Ta’amu in St. Louis went down to the wire. Based on quotes by Ta’amu after being named starter, it’s likely Ta’amu’s experience running the Air Raid offense favored by offensive coordinator Chuck Long, as well as the hurry-up offense necessitated by the XFL’s 25-second play clock, gave Ta’amu a leg-up in the competition. Similarly, the lack of success Ta’amu has experienced in the NFL post-XFL compared to Heinicke can be attributed in part to Heinicke’s style better translating to most NFL offenses.

Quarterback play throughout the XFL in 2020 was scattershot. While one can’t fault St. Louis for hanging on to a trusted backup at the game’s most important position, it’s easy to imagine Heinicke improving QB play in places like Seattle or DC. Did those teams, or others, try to pry Heinicke from St. Louis with a trade offer? Or were Heinicke’s skills underestimated even in a secondary football league? He was a QB allocation to St. Louis, which means he was likely paid above and beyond the standard player contract. For that reason, it appears the league’s personnel department at least saw something in him.

They say football scouting is an art, not a science. Each year, undrafted free agents find their way onto NFL teams. Players that have been released and re-signed time and time again finally stick. Sometimes it’s luck meets opportunity meets scheme fit. Whatever the case in this instance, in Washington, Taylor Heinicke will get the next several weeks to show that he can be the next unlikely success story at the highest level of professional football.