(20 October 2000) — Did the XFL lie to it’s fans? After all, there are many fans who have stepped forward to support the Chicago Enforcers and even some who bought season tickets simply because Dick Butkus was going to be on the sidelines. Most XFL fans bought into the whole concept of Dick Butkus as … Read more

(16 October 2000) — The XFL draft is coming up in two weeks. It is time to take a breather and reflect on how the final months of preparation will be for the XFL teams. The question that many people have been asking is this: How will the XFL go from where they are now … Read more

(26 September 2000) — I was at an airport last year waiting for a connecting flight, and waiting out the time by spending it in the airport bar, and having a very expensive, but cold and refreshing beer. On the bar television was wrestling. No, not Olympic wrestling, but WWF wrestling. A middle aged woman, sitting … Read more

The XFL has announced it will move the “Demons” franchise to Pacific Bell Park in San Francisco. (18 September 2000) — The day was Monday the 10th of July, 2000. The headline on XFLBoard.com had read: Do you know the way to San Jose? We’d like to think that this 1968 Burt Bacharach song title had … Read more

(11 September 2000) — When the XFL was first announced, one of the comments was “Who will play in such a league?” It seems that the real question should have been “What will the XFL do with all the potential players they turn away?” The XFL is getting a lot of attention lately from players … Read more

(30 August 2000) — When the XFL announced the eight team nicknames, colors and logos last week most fans were watching with a certain level of excitement. Here at XFLBoard.com, we were also waiting for the team names to be announced. Mostly though, we wanted to see if the predictions on this board would turn out … Read more 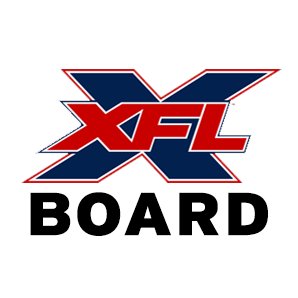 (23 August 2000) — The XFL has announced that the team names will be revealed on Thursday, 24 Aug 00 at 1PM EDT. We’ve been speculating and rumor-mongering on this board for the past four months and we are glad that the league will finally make it all official. The nickname rumor train gave us … Read more

(21 August 2000) — Have you been following the rise of the XFL? How has the trip been so far? Let me tell you… The XFL was first announced in February 2000. This web site and a few others were created in the months that followed. In this time we have seen the league start from … Read more