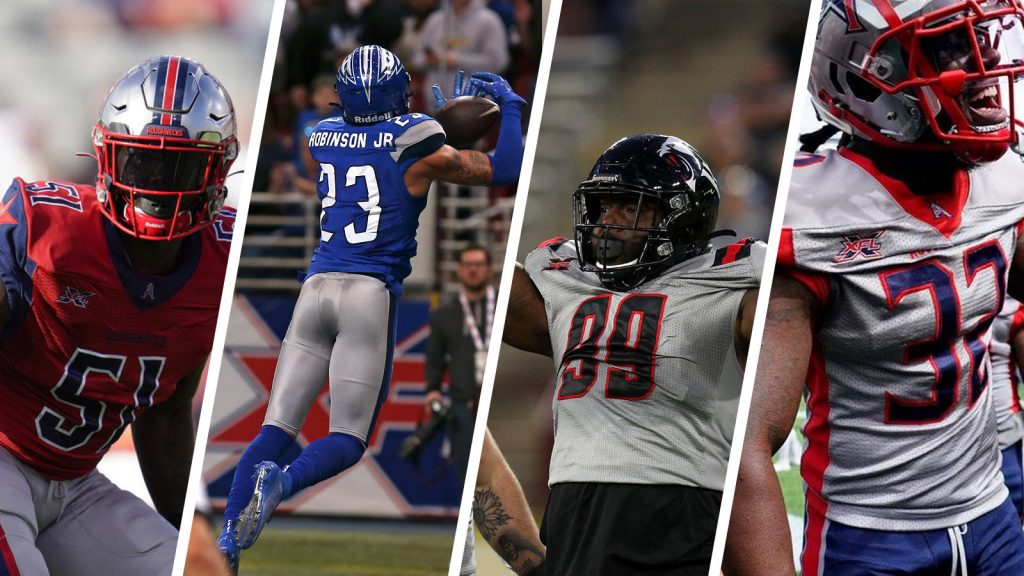 Part two of my look at XFL players in NFL camps consists of defense and special teams. Offense, part one, can be found here

DT Cavon Walker, Pittsburgh Steelers (New York Guardians): Pittsburgh added some competition to its defensive line by landing the XFL’s sack leader in 2020 in Cavon Walker. Not only did Walker amass 4.5 sacks in five games for the Guardians, he also finished fourth on the team in tackles, which is unusually high for a 3-4 defensive end. He’s reprising that role in Pittsburgh. One site gives Walker the best chance to make the team of all the XFL refugees in camp with the Steelers this summer. To do so, he’ll have to beat out a few 2019 and 2020 late-round draft picks.

DT Kahlil McKenzie, Cincinnati Bengals (Los Angeles Wildcats): It’s been quite the football odyssey for McKenzie, the son of NFL personnel man Reggie McKenzie. He played defensive tackle in college, but when drafted by the Kansas City Chiefs, he was moved to offensive line. He played there in the XFL until his season ended due to injury in late February. On Tuesday, the Bengals signed him and moved him back to the defensive line. He’s interesting, if not raw, and time is working against him to make an impression. If he does, the practice squad may be his destination.

DE Will Clarke, Detroit Lions (St. Louis BattleHawks): Clarke is another recent signing, joining Detroit on Monday. He has the pedigree as a former 3rd round draft choice in the NFL, but that was way back in 2014. Clarke was signed due to rookie Jashon Cornell’s season-ending injury and Austin Bryant landing on the physically unable to perform list (PUP). He adds depth for the last few weeks of camp, but that’s all he’s projected to be: Neither of the Lions beat writers for The Athletic included Clarke in their projected 53-man rosters.

LB Edmond Robinson, Atlanta Falcons (Houston Roughnecks): Houston featured an active linebacking corps under defensive coordinator Ted Cottrell this year, and Robinson chipped in with 22 tackles, two sacks, and three tackles for loss. Robinson’s best bet to make the Falcons would be to unseat LaRoy Reynolds at the end of the linebacker rotation and contribute on special teams. That won’t be easy, as Reynolds has proven himself to be a stalwart special teamer in his seven NFL seasons. There are only two traditional linebacker positions in Atlanta’s base defense, making the numbers game more difficult for Robinson to crack.

CB Josh Hawkins, Atlanta Falcons (Dallas Renegades): A top corner in the XFL with the Renegades, Hawkins is tentatively listed as the third corner on the right side on the Atlanta Journal-Constitution’s recent depth chart. Matthew Tabeek of the Falcons’ official site predicts six corners making the team (consistent with the last three years), with five locks. Like many others on this list, it means Hawkins is fighting the field for the last spot of this position group. Tabeek gives Hawkins the edge over Jordan Miller, a 2019 Falcons 5th round pick. This one will go down to the wire.

CB Deatrick Nichols, Miami Dolphins (Houston Roughnecks): Nichols is on his second team this summer, having previously been signed and then released by the New Orleans Saints. He led the XFL in interceptions (three) and had six passes defensed. Miami’s number four (dime) cornerback job is up for grabs, and Nichols is in the running. Statistically, the Dolphins had the worst defense in the NFL last season, and as the team has continued to churn its roster since Brian Flores took over as head coach, there are many positions in which roles can yet be claimed.

CB Saivion Smith, Dallas Cowboys (Houston Roughnecks): Smith’s run at a roster spot in Dallas started on the wrong foot, as he was placed on the team’s COVID-19 list to start camp. A highly regarded undrafted free agent out of Alabama in 2019, Smith was behind Ajene Harris on Houston’s cornerback depth chart in 2020. The Cowboys drafted two players at the cornerback position this spring, and both will make the team. It will be an uphill battle for Smith to make it.

S Dravon Askew-Henry, New York Giants (New York Guardians): You may have seen Askew-Henry’s name on social media this past week: Not only did he stand out in last Friday’s scrimmage, but the loss of rookie S Xavier McKinney with a fractured foot, which will sideline him for months, opens the door for Askew-Henry to earn an opportunity for more playing time. He has played cornerback in camp in addition to being listed as a safety (he played nickel corner with the Guardians). That versatility will be a plus when cut-down day arrives.

S Kenny Robinson, Carolina Panthers (St. Louis BattleHawks): The hope for XFL fans is that Robinson opens the door for future college-eligible players to sign on with the XFL, make a name for themselves through their play, and get drafted into the NFL. The BattleHawks’ starting free safety was a 5th round pick of the Panthers. But success isn’t coming easy for Robinson: Both the Charlotte Observer and The Athletic have noted that Robinson isn’t making much of an impact in camp so far. While he’s likely to make the team by virtue of his draft status, Robinson seems to be struggling to fend off Quin Blanding for the backup free safety job behind Tre Boston. He had perhaps his best practice of camp on Friday.

K Austin MacGinnis, Los Angeles Rams (Dallas Renegades): These days, some teams only take one kicker into camp. With only an 80-man roster instead of 90, backups at special teams positions are ever rarer. Yet the Rams, searching for a kicker, are carrying three, including MacGinnis. His competition consists of 2020 7th round draft pick Sam Sloman and CFL refugee Lirim Hajrullahu. MacGinnis was a perfect 10-10 in the XFL including 4-4 from 40-49 yards out. In the first high-pressure kicking situation of camp, Sloman slumped and Hajrullahu shined. This competition will likely come down to the final days, with ability to consistently kick off deep playing a factor as well.

LS Nick Moore, Baltimore Ravens (Tampa Bay Vipers): Even more rare than a team taking two kickers to camp is a team taking two long snappers to camp. Baltimore’s Morgan Cox has been snapping for the team since 2010, so if he gets replaced it likely will be more of a salary cap move than a dip in his performance. If two guys can do the job equally well and one comes much cheaper (Cox is set to count $1.24 million against the cap this year; Moore’s number, if he makes the team, will be half that), then a business decision must be made. Aging long snappers don’t decline; they just get priced out of the sport. For what it’s worth, Moore was a highly-rated snapper going into the 2019 NFL Draft.