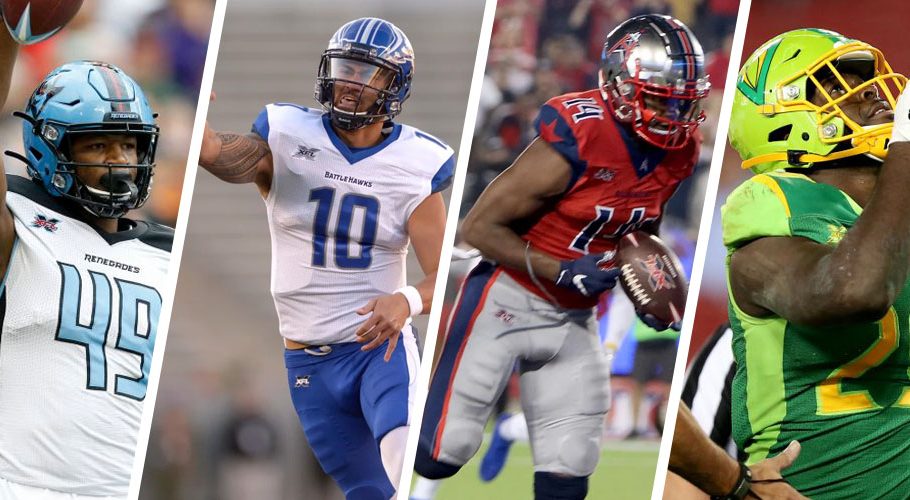 Upon suspension of the 2020 XFL season and subsequent bankruptcy of the league, several players signed on with NFL clubs ahead of training camp. Signings slowed to a crawl early in the summer as the NFL tried to figure out how to best ramp up workouts amid the COVID-19 pandemic.

With training camps now in full force, we’re seeing more and more former XFL players latch on with NFL teams, or at the least, get brought in for workouts. Our own Mike Mitchell has done a tremendous job keeping track of those workouts on Twitter (@MMFBWriter).

The cancellation of the preseason has made long odds even longer for these fringe players. It has also made it more difficult to gauge their chances of making NFL squads. Because there are no preseason games, there are no depth charts released by teams.

Nevertheless, with information culled from various media outlets (and depth charts provided by Ourlads.com), I’ll look at where former XFL players on NFL teams stand with final cuts looming on September 5. In this column, the offense. Watch out for my column on defense and special teams in the coming days.

You can also keep up with XFL player transactions in the NFL on my thread in the XFLBoard.com forums here.

QB PJ Walker, Carolina Panthers (Houston Roughnecks): The presumptive first-half MVP of the XFL in 2020, Walker finds himself in a battle with 2019 3rd round pick Will Grier to back up starter Teddy Bridgewater in Carolina. Covering the Panthers for The Athletic, Joseph Person noted after Tuesday’s scrimmage that “the backup quarterback battle remains tight.” In a normal training camp, preseason games would be where this battle would be won or lost. Both are likely to make the team, but it sounds like the competition to be number two will come down to the wire.

QB Jordan Ta’amu, Kansas City Chiefs (St. Louis BattleHawks): The Super Bowl champions are carrying four quarterbacks in camp. Veterans Matt Moore and Chad Henne are virtually the same player, so it’s hard to imagine both making the team over Ta’amu. Henne and head coach Andy Reid have been effusive in their praise for Ta’amu, with Henne calling him “phenomenal” and Reid lauding his work ethic. Ta’amu and Moore have split third-team reps much of the way, so the former BattleHawk standout may be carrying a clipboard this season. This year, Ta’amu may be groomed to eventually become the backup when Henne retires (he’s 35 years old).

RB Jacques Patrick, Cincinnati Bengals (Tampa Bay Vipers): The lone running back from the XFL to land on an NFL roster, Patrick and De’Veon Smith combined for an effective two-headed rushing attack in Tampa Bay this spring. Patrick is battling for the third running back spot and he made his presence felt in the team’s scrimmage on Friday. With starter Joe Mixon only getting a few snaps, Patrick shined with a 41-yard run as well as a 14-yard touchdown. He was listed as a scrimmage “winner” by The Athletic’s Jay Morrison. Unfortunately for Patrick, his main competition, Samaje Perine, also had a strong day. Patrick may be a candidate for the team’s 16-man practice squad.

TE Khari Lee, Atlanta Falcons (DC Defenders): The recipient of the first “splash” play of the XFL season, a 39-yard touchdown catch on a trick play in the opening game of the season, Lee is fourth at tight end on the Atlanta Journal Constitution’s unofficial depth chart. Most teams only keep three at that position, so Lee is squarely on the bubble, likely battling former practice squadder Jaeden Graham for the spot. Despite his highlight reel TD catch for the Defenders, the 6’4” 255 pounder’s best chance of making the team may be via his blocking.

TE Donald Parham, Los Angeles Chargers (Dallas Renegades): Parham was a man among boys at his position in the XFL, posting 24 catches and four touchdowns to go along with a 12.8 yards per catch average. He was one of the more sought-after players when the league folded. Hunter Henry and Virgil Green seem set as the 1-2 punch at TE for the Chargers; Parham appears to be battling Stephen Anderson for the final spot, and it’s not clear who has the leg up right now. If Parham gets cut, look for another team to claim him on waivers. He’s raw, but the long-term potential may be enough for another team to stash him.

TE Colin Thompson, Carolina Panthers (Tampa Bay Vipers): Thompson is one of those surprise signings from the XFL, as he was a third-string tight end for the 1-4 Vipers. He does have a connection with Panthers head coach Matt Rhule, having played for him collegiately at Temple. Thompson also brings position flexibility, as he lined up at fullback at times for Tampa.Donald Parham, An injury to Temarrick Hemingway, the player Thompson is likely battling for the last tight end spot, could give Thompson a leg-up. Thompson didn’t do much in the passing game with the Vipers, but often reserves at this position are utilized more for their blocking.

WR De’Mornay Pierson-El, Las Vegas Raiders (St. Louis BattleHawks): The BattleHawks’ leader in receptions playing out of the slot, Pierson-El has an uphill climb to make the Raiders. The Las Vegas receiver room is pretty deep and Pierson-El is behind youngster Hunter Renfrow and veteran Nelson Agholor on the depth chart. A torn labrum suffered by Tyrell Williams may open a space if Williams can’t play through the injury. Pierseon-El will battle vets like Zay Jones, Marcell Ateman, and Keelan Doss for a back-end roster spot. In this case, it may come down to who excels on special teams; luckily for Pierson-El, he has experience returning punts while in the XFL.

WR Cam Phillips, Carolina Panthers (Houston Roughnecks): It took longer than anyone expected, but Phillips finally joined an NFL camp yesterday when he signed on with the Panthers. It may not be a coincidence that he is teamed up once again with his XFL QB, PJ Walker. Phillips was arguably the second-best offensive player in the league behind Walker and was clearly the best receiver in the XFL in 2020. It’s a little too early to tell how he fits in on Carolina’s depth chart; despite his talent, he’ll have an uphill battle to make the team based on the fact that he’s signing so late in camp. For now, he’ll earn snaps at a position that has been hamstrung by injuries of late.

OT Jarron Jones, Pittsburgh Steelers (New York Guardians): Offensive line play was a surprise bright spot for the XFL in 2020, so it shouldn’t come as a shock that eight players from that position group have been snapped up by NFL teams, who are always on the lookout for competent line play. Positionally, offensive line play during practice is one of the more difficult on which to report. It’s a lot easier to say someone outran a defensive back for a touchdown or made a circus catch than to say a tackle used his hands well to get inside the defender’s shoulder pads on a rep. The Pittsburgh Post-Gazette called Jones “intriguing” in their roster rundown, but he’s third-team left tackle for now.

OT Anthony Coyle, Pittsburgh Steelers (New York Guardians): Coyle joins his Guardians teammate Jones in Latrobe this summer for Steelers camp. Coyle brings versatility as he can also play guard; in fact, he was New York’s starter at left guard, but projects to tackle with Pittsburgh. Coyle may have a little better shot to make the team from the right tackle spot, but both he and Jones are still considered roster longshots.

OT Storm Norton, Los Angeles Chargers (Los Angeles Wildcats): Norton stayed in the City of Angels for the summer. The Chargers offensive line has long been a scourge, and Norton is showing he’s more than just a camp body; he’s been entrenched with the second-team offensive line at right tackle, even taking some first-team snaps when veteran Bryan Bulaga has been out. Head coach Anthony Lynn has complimented Norton’s consistency. Norton graded out as the top offensive lineman in the XFL according to rankings by Pro Football Focus.

OT Pace Murphy, Dallas Cowboys (Dallas Renegades): Like Norton, Murphy stays nearby for his shot at the big time. Murphy signed with the Cowboys a week ago to provide depth due to three tackles struggling with injuries for America’s Team. Because of his late entry into the roster sweepstakes, Murphy is unlikely to win a spot when cutdown day comes. If injuries continue to ravage Dallas’s line, however, Murphy’s name may get called somewhere along the way.

G Michael Dunn, Cleveland Browns (Seattle Dragons): Signed earlier this month when three guards for the Browns opted out of the 2020 season due to the coronavirus, Dunn manned Seattle’s right guard spot this past season. He is one of only three backup guards in training camp, making his path to a roster spot theoretically a little easier. However, this could be a position in which the Browns scour the waiver wire for help after final cuts are made across the league. Even if he makes the team out of camp, Dunn’s spot may not be safe for week one.

G John Keenoy, Pittsburgh Steelers (Dallas Renegades): Yes, another XFL offensive lineman in Pittsburgh. A left guard in Dallas, Ourlads lists him as the third-string center with the Steelers. Starting center Maurkice Pouncey has missed some practice time, which may have allowed Keenoy to take more meaningful snaps than he would otherwise. In his way for a roster spot is JC Hassenauer, who ironically found his way onto Pittsburgh’s roster in 2019 after showing well in the Alliance of American Football before that league shut down.

G Avery Gennesy, Tennessee Titans (Houston Roughnecks): Like Dunn in Cleveland, Gennesy is one of just three guards the Titans are carrying in camp. But when starting left guard Roger Saffold missed time at practice with an injury, it was backup center Jamil Douglas who took his spot with the first team. That flexibility could impede Gennesy’s chances of making the team. At right guard for the Roughnecks, Gennesy helped pave the way for PJ Walker, James Butler, and the rest of the powerful Houston offense.

C Jon Toth, Cleveland Browns (DC Defenders): Toth is the newest addition to this list, having signed today. He was placed on injured reserve by the Defenders just prior to the premature conclusion of the XFL season. Before that, he was the starting center for DC. In Cleveland, he slots in behind JC Tretter and Nick Harris at that position. Toth’s chances of making the team are tied to the recovery from arthroscopic knee surgery of Tretter, who is slated to be ready for week one. If he suffers any setbacks, though, the Browns will have Toth ready to back up Harris, their rookie 5th round draft pick.