XFL Players who are looking to get their foot in the NFL door must first impress during weekly workouts. 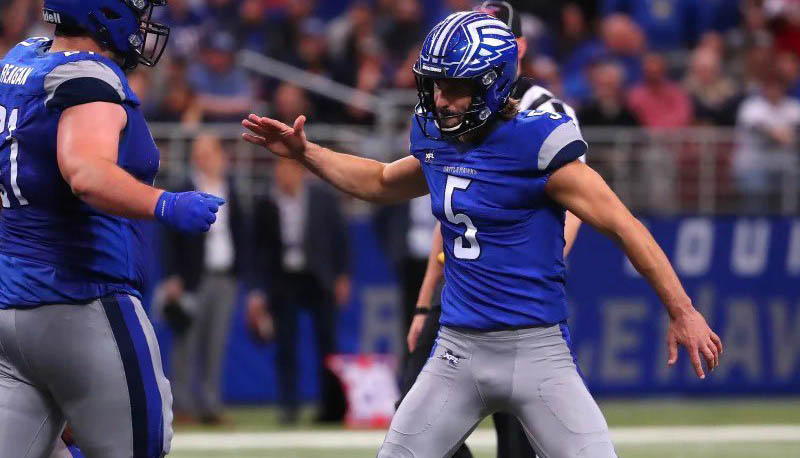 Former BattleHawks kicker Taylor Russolino is one of the latest XFL players to be called for a workout with an NFL team, namely the Denver Broncos. (Twitter)

XFL alumni are well-represented in the NFL this season, with almost 30 players who participated in the league in the spring currently on NFL rosters or practice squads. But dozens of others looking to get their foot in the NFL door must first impress during weekly workouts held by individual teams.

Being a free agent requires patience; you may only get invited to one or two workouts during the course of the regular season. The pressure to perform in those workouts is high. Meanwhile, some players make working out and staying in shape a full-time job, hoping for that phone call requesting that they appear in front of team personnel.

Through week 12 of this 2020 NFL season, over 30 former XFL players have earned workouts with NFL clubs. Some of those players have been signed, while others have left without contract offers and await interest from another team.

A football fanbase craving any and all information can find the names of who works out, but the details of the workouts themselves from start to finish have long been unclear. Who gets the call? Of what does the workout consist? Who is on hand to watch the workouts?

I sought to answer these questions. In doing so, I spoke to an agent who represented players that participated in the XFL this year for an explanation of the workout experience. It’s important to note that, like everything else in the world, the workout procedure is a little different in 2020 due to COVID-19.

Players must get tested prior to taking the field, so it’s more of a multi-day (sometimes a week) process than it has been in the past. This process has also stunted the number of tryouts we’d normally see by this point in the season.

While teams report workouts to the league office every day, the most popular day for workouts is Tuesday. If an injury occurs to a player during a game on Sunday, teams can make a call to free agents on Monday and, in a normal year, have them in the building on Tuesday.

That gives the players enough time, if they are signed, to digest the playbook and contribute in the next game. For the teams, they can get a look at players prior to starting game prep in full for the next week’s contest.

According to the agent I spoke with, the tryout can start with a call to either the agent or the player himself. It tends to depend on the team, and the relationship the team has with the player or agent. The player would then fly in the next morning for the workout.

The coaching and front office staff that attend the workout also varies by team. “I doubt GMs (general managers) are showing up unless it’s a big workout for someone like a Dez Bryant maybe,” the agent told me. Otherwise, it’s likely to be at least a position coach or two.

Often, you’ll hear about teams hosting several players at a position that is not of an immediate need. Media members will report that teams are just updating their emergency list. If a player suffers an injury in practice on a Friday, the team won’t have time to fly in free agents to work out prior to Sunday; that’s where the emergency list comes in handy.

Are players told when they come in for a workout that it’s to address an immediate need or if it’s emergency list upkeeping? “This depends on the team and who the scout is the agent is talking to,” the agent told me. “I have had teams call out of nowhere on players and I have had teams tell me that my guy is at the top of their list and to be ready.”

Subterfuge is the name of the game in the NFL, so it’s difficult to tell even as a player on the street whether or not a team is being upfront and honest about its interest. “Normally if a team is bringing a player in for a workout though, they have a need or see a need arising in the future,” said the agent.

Once a player arrives at the team’s headquarters and takes the field, the workout begins with stretching. If it involves a skill position player (QB, WR, RB), the normal route tree will be run, similar in some ways to what you’d see watching the NFL Scouting Combine. Position drills and one-on-ones could also be utilized in the workout.

“Teams are trying to see how a player moves and if they are in shape. Those are the two key areas of focus during the workouts,” reported the agent with whom I spoke. The workouts are generally short, maxing out at a few hours.

After the workout, the players head back home and wait to hear from that team, or the location of their next workout. According to the agent, the pandemic has ravaged the workout scene and has done particular damage to young players.

“Teams aren’t just flying in players to look at them now,” he said. “They are normally only bringing guys in they have a serious interest in signing and generally those are players they are familiar with (veterans). It’s been an awful year for undrafted players from the 2020 draft.”

While practice squad slots have increased this year from 10 to 16 due in part to the need for last-minute replacements because of the coronavirus pandemic, up to six of those spots can be manned by veteran players with an unlimited number of accrued season. In past years, practice squad spots were used almost exclusively on rookies and first-year players. The new collective bargaining agreement had called for practice squads to increase from 10 to 12 this year anyway, with another increase to 14 slated for 2022.

The NFL’s loss could be the XFL’s gain. Practice squad players and street free agents may sign with NFL teams in the offseason, but without getting to see those undrafted players throughout the in-season workout circuit, nor at pro days or mini-camps in the spring, more stones may go unturned than in previous years.

If those players migrate to the XFL so as to be seen by NFL scouts and coaches and to put some professional work on tape, the quality of play in the XFL will continue to improve. With the early success of players like P.J. Walker, Donald Parham, and Sergio Castillo, fringe NFL players will see the XFL as an avenue to achieve the dream of playing in the highest level of professional football, even if it means taking a roundabout way to get there.