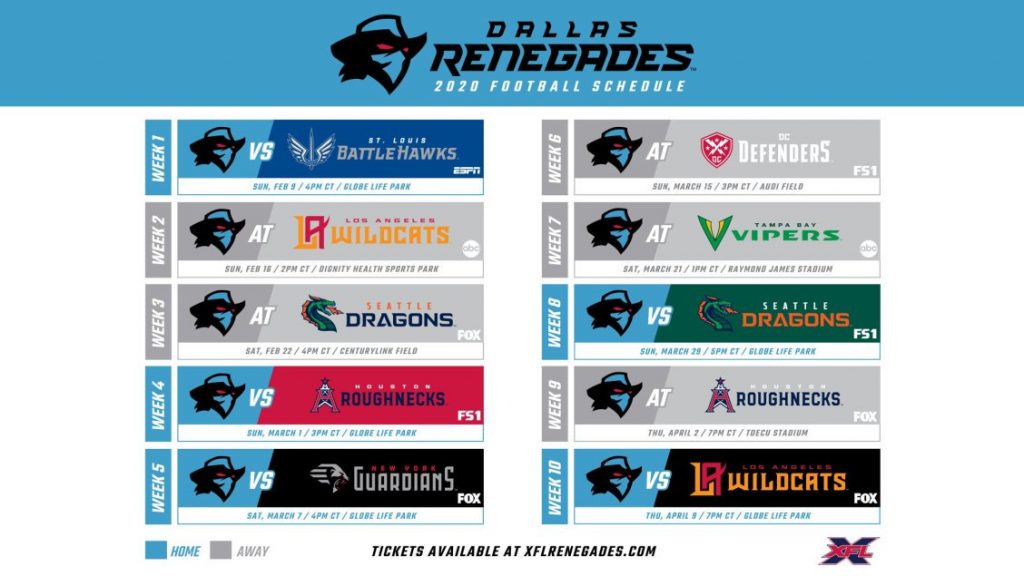 The next step in progressing the XFL season took place Tuesday when they release team schedules for the upcoming 2020 season. The Dallas Renegades are one of the most highly anticipated teams of the season simply due to Bob Stoops coming out of retirement to coach the team while also teaming up with his former Oklahoma quarterback Landry Jones.

We will examine the Renegades’ ten game season and see which of the games to watch out for and how their home games stack up to their road games.

One of the most anticipated games of the season comes in week one where Globe Life Park will, for the first time, not be a baseball stadium and we get a first look at how Stoops, Landry Jones, and the high-flying offense operates. BattleHawks’ offense will test Chris Woods’ crew early with Jordan Ta’amu’s mobility and strong backfield. BattleHawks safety Kenny Robinson from West Virginia may give Jones some issues as he debuts as the first college player to leave school for the XFL.

First road challenge for the Renegades as their defense has to play good pass defense against Norm Chow’s offense. Should be interesting to see how they do playing an earlier game on the west coast, especially for those younger players who may not be as experienced with it as some of the NFL vets like Jones and Lance Dunbar.

Brandon Silvers really impressed in the last few weeks of the Alliance season with the Memphis Express which could cause some problems for the Renegades’ secondary. Another road test for the Renegades on the west coast and on a shorter week should show us how good the Renegades are. CenturyLink Field is one of the toughest, loudest places to play in the NFL and the crowd noise could play a factor in how the Renegades’ offense plays out.

The only in-state rivalry in the XFL should have the state of Texas excited for the XFL’s version of the Lonestar Showdown. Also a great showdown between two great former college coaches in Stoops and June Jones. Dallas’s rush defense will have to be on full display as they could be facing one of the best backs in the league in Andre Williams. Hopefully by this week, Landry Jones and the offense is comfortable enough to be going full speed.

Matt McGloin leads an offense that has plenty of talent at the receiver position with DeAngelo Yancey and Mekale McKay. Back-to-back home games should help the team play well behind their home crowd.

Cardale Jones plays in front of his home crowd as this team is loaded with talent on offense and defense. This may be their toughest challenges of the season being on the road and having to deal with Pep Hamilton’s offense.

Tampa Bay has a great-looking running game with De’Veon Smith and defensive coordinator Jerry Glanville’s crew looks tough from top to bottom. Traveling back-to-back weeks on the east coast, this game may be a trap game for the Renegades as we dive deeper into the second half of the season.

The Dragons will make their debut in Dallas as things start to get interesting in terms of the playoffs picture as both teams have been fans’ choices to be the two best teams in the west.

The first of two straight weeks playing in prime time on Thursday has the rematch of the Lonestar Showdown from a month prior. Getting closer to the playoffs should make this game a must-win for the Renegades to fight or secure a spot in the playoffs. A short week will makes things interesting and show which coach is up for the task of getting their teams ready for the game.

Both teams look good enough on paper that this game could determine who goes to the playoffs or who stays at home. It could even be a preview of the Western Finals game the next week. Either way, both offenses will be putting up a lot of yards so should be a fun game for fans to watch on the Renegades’ second straight prime time game on Thursday.

The early west coast road trips could cause a hiccup or two for the Renegades early, but their home games should be in favor of them. Week 9 could present a challenge with a short week, but they got to love the fact that they could be on prime time the last two weeks of the season for all fans to see. This shows the league understands that the Renegades have two of the biggest names in the league (Stoops and Jones) and they want them on national television as much as they can. The expectations are high as many have picked the Renegades to either win the XFL title or make the title game. If they lose both of their first two road games of the year, it could smell trouble for their season. The best part about a ten game season? Every game counts.

Why is it in the XFL’s Best Interest to Tap into the Female Football Fan Base?
St. Louis BattleHawks XFL Draft Recap