Here’s a breakdown of the position-by-position lineup as the Vipers prepare to play the New York Guardians on Sunday. 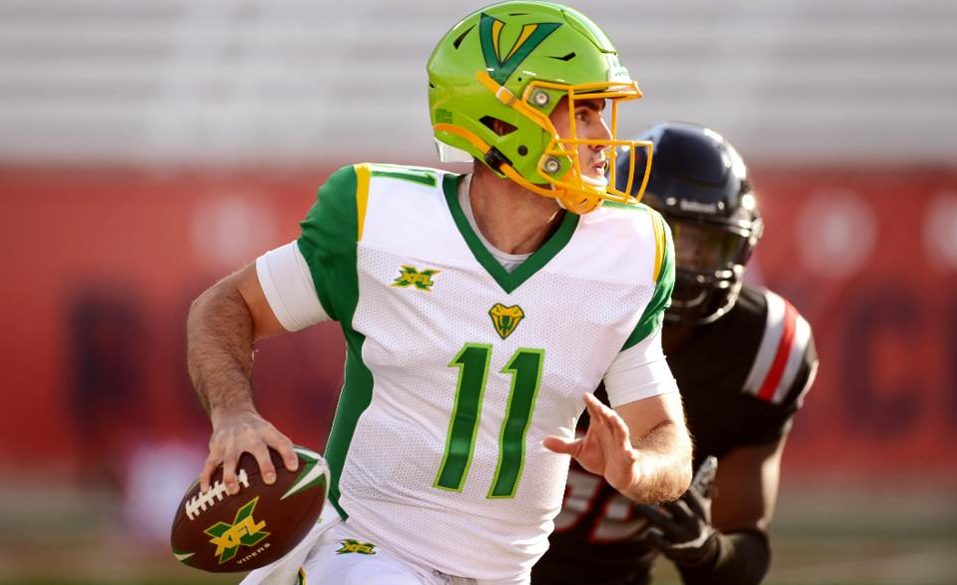 The Tampa Bay Vipers released their week one depth chart to local media earlier in the week, and today, along with the rest of the teams, on XFL.com. Here’s a breakdown of the position-by-position lineup as they prepare to play the New York Guardians on Sunday. 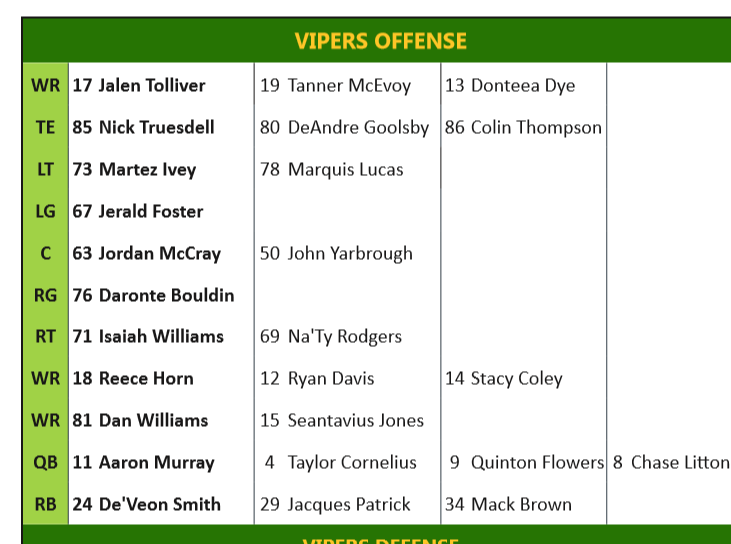 QB: Aaron Murray was announced as the starter by the Vipers’ Twitter account on January 31st, an announcement that should have come as no real surprise to anyone following the team. What’s more interesting is that Quinton Flowers is listed as #3 QB ahead of Chase Litton.

Litton was acquired by the Vipers near the end of training camp so he may still be learning the playbook. While he’s not listed on the injury report for week one, Vipers head coach Marc Trestman noted in an article on XFL.com that Litton had been battling an illness. That could explain his placement on the depth chart for this week.
Just as interestingly, Flowers is not listed on the RB depth chart, the position he was expected to see the most amount of playing time. Even as the third QB, he’s likely to be active on gameday and see a handful of snaps on offense.

RB: The absence of Flowers leaves just three other backs. The order listed on the depth chart is not surprising, as I had this pegged during camp. Jacques Patrick may be the third-down back while De’Veon Smith is expected to play the early downs. Mack Brown has the talent to eat into someone’s playing time as the season progresses.

TE: Only one tight end is listed as starter, that being #1 pick Nick Truesdell. DeAndre Goolsby and Colin Thompson are two and three, though it doesn’t seem if there’s a major talent gap between the two. Goolsby is on the injury report for week one, which may explain the signing of Pharaoh McKeever today. McKeever was on Team Nine and was let go in final cuts by Tampa. If Goolsby doesn’t play, Thompson will move up and see more playing time.

WR: A couple of surprises here among the three starters listed. Two of the more experienced receivers, Seantavius Jones and Stacy Coley, are on the second and third team respectively. Coley was waived today so that the Vipers could add McKeever to the roster. That makes a disappointing return in the trade that sent Freddie Martino to Dallas; Martino is a starting receiver on the Renegades’ initial depth chart.

Youngsters Jalen Tolliver and Dan Williams, plus AAF standout Reece Horn, get the starting nods. Tanner McEvoy could be a big red-zone target and joins with Flowers in having some positional flexibility.

OL: The depth chart shows the guard position as being perilously thin. Andrew Tiller was placed on injured reserve recently, leaving backup center John Yarbrough as the likely swing guard. Marquis Lucas, who has settled behind LT Martez Ivey, also has experience at guard. The center and both tackles seem entrenched as starters going forward. OT Na’Ty Rodgers was a recent waiver pickup who mostly played right tackle in college. 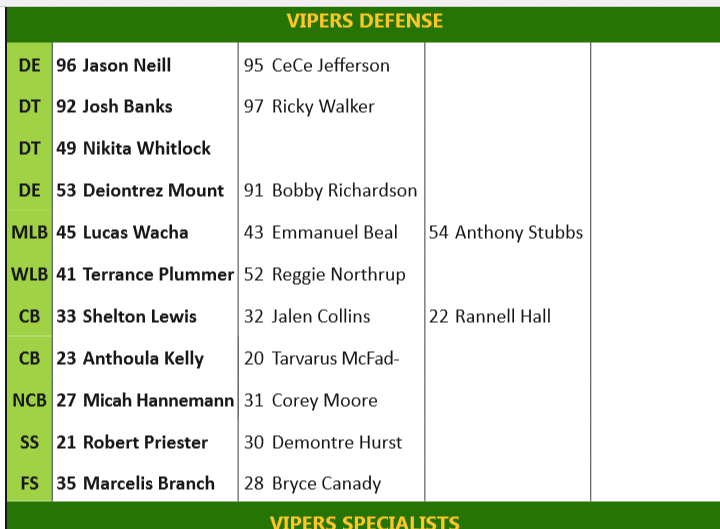 DL: The Vipers have four down-linemen in the starting lineup. The most interesting battle was at defensive tackle; Josh Banks outlasted Ricky Walker to earn the first team nod next to veteran Nikita Whitlock. There is decent depth at the end with Bobby Richardson and CeCe Jefferson backing up Jason Neill (who joins Goolsby as the only two players on Tampa’s week one injury report) and Deiontrez Mount.

LB: As expected given the roster numbers, only two linebackers are listed as starters, meaning the Vipers expect to be in nickel most of the time. I had predicted this when I looked at Tampa Bay’s initial 52-man roster (https://xflboard.com/news/tampa-bay-vipers-official-52-player-roster-breakdown/).

Reggie Northrup returns to back up Terrance Plummer after he was released at cut-downs, replacing the injured Ike Spearman. Korey Toomer, who was claimed on January 22nd but placed on the reserve list on January 27th, could play a key role if he’s activated during the season. There’s some depth here.

DB: The nickel back spot will be manned by two safeties in Micah Hannemann and Corey Moore. Like receiver, this is another position where the veterans have taken a backseat to younger players; Demontre Hurst and Jalen Collins in particular have found themselves on the second team. This was a spot I had real difficulty projecting heading into the season, and the depth chart bore that out. 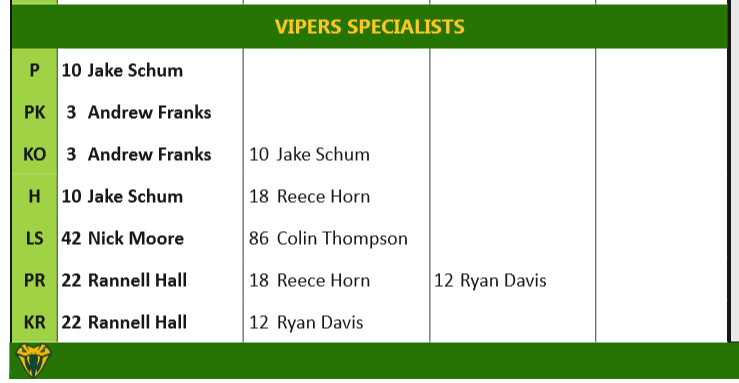 ST: Kicker, punter, and long snapper have long been set. Colin Thompson will back up Nick Moore at long snapper. WR-turned-DB Rannell Hall is listed as both first team kick and punt returner. Hall returned kicks in college, but not punts. Receivers Ryan Davis and Reece Horn back up those spots. Davis, out of Auburn, was lauded for his “quickness and suddenness” in his NFL.com draft profile, both qualities necessary for a return man.

Potential QB2’s who could be targeted via Trade
St. Louis BattleHawks vs. Dallas Renegades Week 1 Preview