Seven trades, and how they ended up working out for both sides. 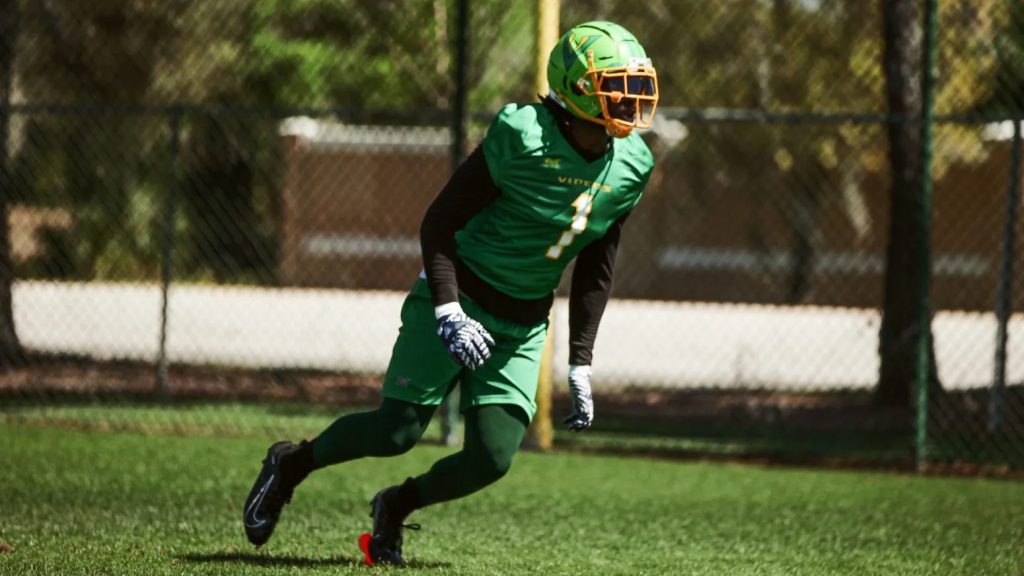 A newly acquired wide receiver S.J. Green practicing for the Vipers before heading into a Week 4 matchup against the DC Defenders. (Credit: XFL.com)

The Tampa Bay Vipers were one of the more active XFL teams when it came to wheeling and dealing before and during the season. In all, the team made seven trades in 2 ½ months. Here are the seven trades, and how they ended up working out for both sides. I’ll borrow from Pro Football Focus’s scale terminology in grading the deals: Elite, Very Good, Above Average, Average, Below Average, Poor.

Sanders was selected in the third open phase by the Vipers in the XFL Draft, meaning he was likely buried on the depth chart at defensive tackle as camp opened. Orr was a sixth-round pick by LA in the defensive front-seven phase. Orr, from the University of Florida, may have wanted to play closer to home. He didn’t last long in Tampa and was cut during mini-camp.

Sanders made the Wildcats and accrued five tackles prior to being placed on injured reserve on March 3rd. He played a reserve role in LA’s 3-4 defense. Given the draft pedigree of both men in terms of where they were selected, Sanders outplaying Orr could be considered a surprise. Tampa Bay could’ve used a backup DT as the year progressed with injuries to Ricky Walker that led to a late-season trade for DT Kellen Soulek.

After acquiring what turned out to be valuable depth just six days earlier, LA went to the Viper well once again, fleecing Tampa Bay even more in their follow-up trade. Springs, selected in the first round by Tampa in the defensive backs phase, emerged from camp a starter for the Wildcats, registering 16 tackles, an interception, and a pass defensed. As far as the “why?”: Like the earlier trade, you must wonder if Springs, who played college ball at Oregon, preferred a return to the West Coast. If not, this seems awful early to give up on your first-round selection if you’re the Vipers.

Tampa’s corners had an up-and-down year. They took a chance on the troubled Collins and his NFL 2nd round draft background, but he turned out to be a bust. Selected by LA in November’s supplemental draft, Collins was buried on the depth chart in Tampa, notching just one assisted tackle and a pass defensed before being waived outright on March 3rd.

Another high-round draft pick was exchanged in this deal. Coley, picked in the fourth round by Dallas, was sent to Tampa for Martino, whom the Vipers plucked in the second phase of the open draft. While Coley made the Vipers after camp broke, he was waived three days before the season opened to make room for a backup tight end to fill in for the injured DeAndre Goolsby. Tampa’s receiving corps was relatively deep, so Coley wasn’t horribly missed. It should be noted that no other team picked Coley up during the season.

Martino was behind a number of talented receivers in Dallas before he was put on injured reserve on March 9th. In his time with the Renegades, Martino snagged four balls for 58 yards with a long of 32. He was not the first option in Hal Mumme’s pass-heavy offense, but there were clearly enough balls to go around. Had he not been traded, it’s unlikely Martino would’ve cracked Tampa’s starting lineup. Still, a minor contributor is more than what the Vipers received.

This trade was consummated just prior to cut-down day for all eight XFL teams, and was the final trade made by Tampa before the season began. Campbell and Moore were both 10th round draft picks by Tampa in their respective positional phases. The Dragons’ starting left guard for four games, Campbell was waived by the Dragons on March 11th in one of the last transactions made before the league suspended operations for the season. Up to that point, he had been the lowest-graded Seattle offensive lineman, per Pro Football Focus. Moore was a third-string receiver at one of the three starting spots, bumped up to second-string with the season-long injury to Kasen Williams. Moore ended third on the team in receiving yards with 110 on eight catches.

Bowman was the fourth defensive tackle in the rotation for the Vipers, and his playing time may have eventually been challenged by Kellen Soulek, whom the Vipers traded for at the end of February. Bowman had two tackles and one for loss on the year. The trade for Litton was intriguing at the time, thought to be perhaps a signal the Vipers weren’t happy with their backup QB spot. But when Aaron Murray got hurt, Taylor Cornelius stepped right in and despite an uneven performance in the games he started, the Vipers never looked to Litton. In fact, Quinton Flowers would’ve been next up. Litton ended up getting waived on March 4th when Tampa needed the roster spot for another running back. Once again, Tampa’s trading partner came away with the bulk of the production in a starter and a key reserve.

Toomer was a Vipers acquisition during camp, but he did not report. This trade sent him back to the west coast, where he played in college (Idaho) and where he made his biggest NFL impact (Seattle Seahawks). It didn’t seem as if he would report to Tampa, so the fact the team got anything for him is a plus. Toomer was listed as Seattle’s backup outside linebacker and may not have had enough time to get up to speed in the Dragons’ defense to make a contribution.

Green was a CFL legend who entered the XFL and was claimed by Seattle. He played for Tampa head coach Marc Trestman in Canada and played his college ball in South Florida. It’s possible that, like Toomer, he engineered a trade to be closer to familiar territory. It was thought that the 34-year old Green could step in and be a factor, but he didn’t catch a single pass. This was a trade that was significantly affected by the early shutdown of the league, as these two may have had more of an opportunity in the second half of the season once they were more comfortable with their surroundings.

A coach’s decision inactive for two of Tampa’s three games up to the point of the trade, Stubbs was dealt to St. Louis for cornerback depth needed when Rannell Hall went on injured reserve. When the BattleHawks activated CB Marquez White from injured reserve, it made Caldwell expendable. Caldwell was active for both games for which he was on Tampa’s roster, playing mostly on special teams in backing up Tarvarus McFadden. Stubbs went from a team that played two linebackers in its base to another team that played predominantly a 4-2-5. Suffice to say, Stubbs’s playing time in St. Louis didn’t increase with his address change. He ended the year as a third-sting linebacker behind Dexter McCoil and Shaq Jones. It was a need-for-need depth trade that didn’t hurt either team but didn’t help them a ton in the short-term, either.

Rounding out the third trade in ten days for Tampa Bay was another deal where you are forced to read between the lines to figure out what happened. Reed was placed on I.R. by St. Louis on January 21st. Somehow, he ended up on Tampa to be traded BACK to St. Louis. The best that I can figure is that in order to be activated off injured reserve, you have to clear waivers. It’s similar to the NFL’s process where players have to clear waivers before they are put on I.R. during the preseason. There’s a gentlemen’s agreement among teams to not claim those players, something to which the New England Patriots, in particular, have not always adhered.

Perhaps something similar is in place in the XFL. The unspoken agreement would explain why no team claimed DE Obum Gwacham, for example, when Tampa activated him off IR. But the Vipers may have claimed Reed anyway, knowing that St. Louis wanted him. In order for St. Louis to get him back, they’d have to give something up. In this case, it was backup DT Kellen Soulek. It’s a little surprising Tampa couldn’t get something more, unless Reed wasn’t intent on playing for the Vipers. Soulek didn’t notch any stats for St. Louis and was inactive in week five for Tampa Bay. On their depth chart, he was third-string DT behind Josh Banks and Shane Bowman. Reed had four tackles upon his return to active duty for the BattleHawks, indicating that he was seeing playing time on defense there. It’s another situation where Tampa got something, even if it is a deep reserve, for someone who may not have played for them. Speculation about how this came about makes attaching a grade more difficult.

Tampa made a few shrewd moves to get something out of Korey Toomer and Trovon Reed, but if they plan on being this active in the trade market in 2021, they need to get better value and depth from their deals. This season wasn’t a promising start for them on that front.