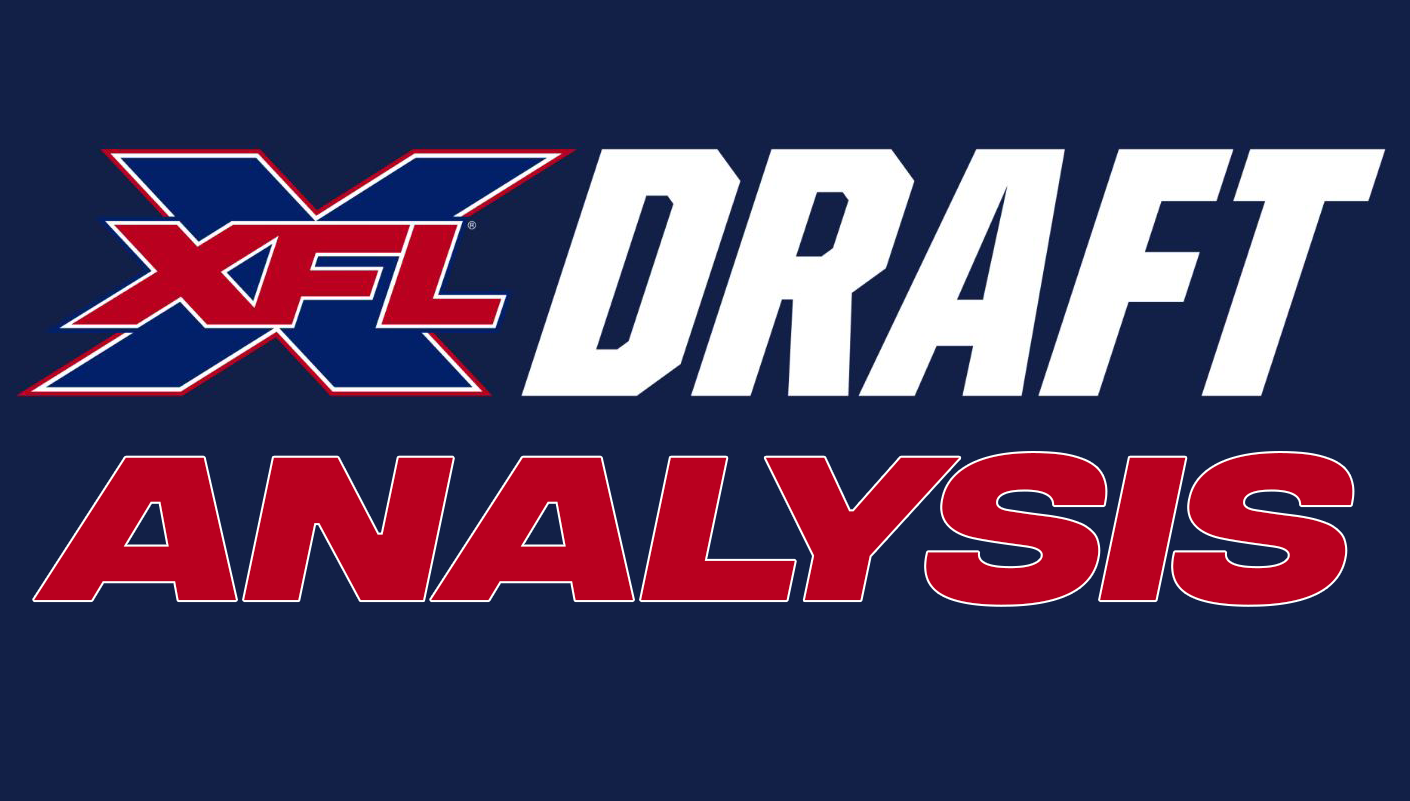 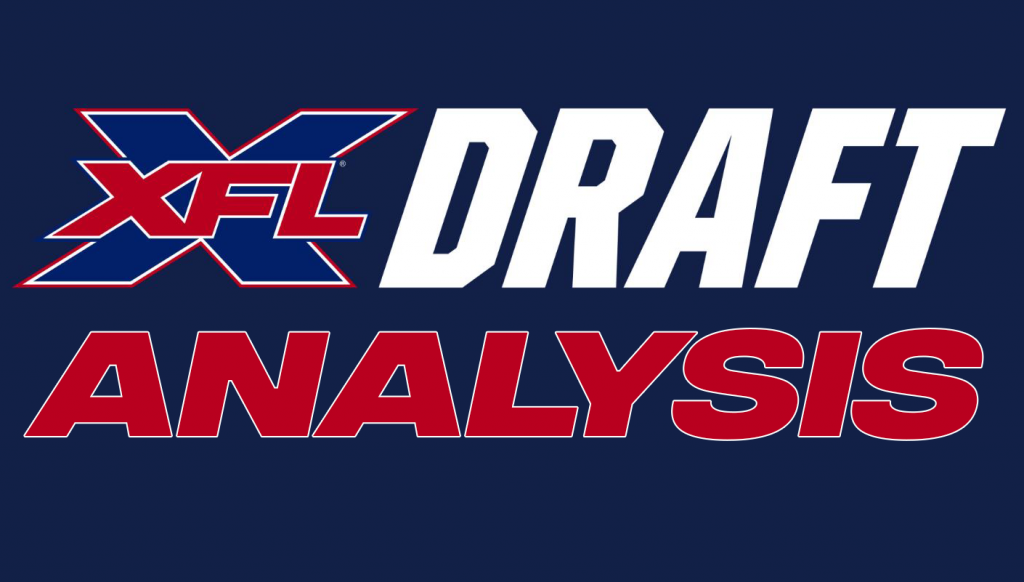 With almost a third of the regular season complete, here’s a look at how the first round draft picks from each phase have fared:

DC: WR Rashard Davis, James Madison: The first overall player chosen, the Defenders knew what they were doing: Davis signed with the Tennessee Titans’ practice squad before camp and was signed to their active roster in December, where he currently resides.

Houston: QB Connor Cook, Michigan State: Cook competed with Houston’s allocated QB, P.J. Walker, in one of the more intriguing camp battles. Walker won out, but there’s no shame in that – he’s on his way to an MVP-like season. Cook, the backup, has yet to see game action.

Dallas: WR Jeff Badet, Oklahoma: One of three starters at receiver for Dallas, Badet has shared targets with other receivers, backs, and tight ends. Even then, he’s been a high-volume target, catching 11 passes. But he only has 72 yards, good for just a 6.5 yard per catch average.

Tampa Bay: TE Nick Truesdell, Grand Rapids, CC: Truesdell has shown glimpses of why the Vipers made him the first tight end off the board. In two games (he missed the third due to injury), Truesdell has seven catches for 78 yards.

St. Louis: RB Christine Michael, Texas A&M: Listed as a starter on the BattleHawks depth chart, Michael has spear-headed a two-man rotation in the offensive backfield for St. Louis. He has 35 carries for 82 yards, a 2.3 average, and three catches for 21 yards. He’ll continue to get the rock in this run-first offense.

Seattle: RB Trey Williams, Texas A&M: Averaging a healthy 4.3 yards per carry on 22 runs, Williams has also contributed eight catches for 44 yards and a touchdown. This all comes with Williams acting as the third team running back.

LA: RB Elijah Hood, North Carolina: Hood missed last weekend’s game due to injury, but LA’s running game didn’t miss a beat. That could cost Hood some playing time to Martez Carter and Larry Rose in the future, as he had been averaging only 3.4 yards per carry as starter prior to the game against the Defenders.

LA: OT Storm Norton, Toledo: Norton is entrenched as the starting left tackle of the Wildcats, tasked with protecting the blind side of QB Josh Johnson. He has performed well to this point.

Seattle: OT Isaiah Battle, Clemson: Battle would be Seattle’s starting left tackle were he not battling an ankle injury that has kept him out the first three weeks of the season. He’s listed as “probable” on this week’s injury report and is expected to make his season debut Saturday.

St. Louis: OT Matt McCants, UAB: The starting right tackle for a BattleHawks line that has given up seven sacks in the first three games. According to traditional draft strategy, this is pretty high to take a tackle to play the right side, considered a non-premium position compared to left tackle.

Tampa Bay: C Jordan McCray, UCF: Manning the pivot for the 0-3 Vipers, McCray has anchored what’s been a so-so offensive line in Tampa. Their run blocking has been superior to their pass blocking so far.

Dallas: OT Willie Beavers, Western Michigan: The left tackle tasked with protecting what some call the face of the XFL, Landry Jones. Beavers comes to the XFL having previously been a part of six NFL clubs.

New York: OT Jarron Jones, Notre Dame: New York’s starting left tackle. With the troubles the Guardians are having in all facets of the game, getting the offensive line to play better would solve a lot of woes on that side of the ball.

Houston: OT Cornelius Edison, Portland State: Edison did not report to minicamp for the Roughnecks, making this a wasted pick for now. They’ll have his rights should he decide to show up at some point.

DC: OT Kyle Murphy, Stanford: The day after Murphy was drafted by the Defenders, he signed with the practice squad of the Houston Texans. He stayed on their practice squad for the rest of the season and was signed to a reserve/futures contract in January.

Tampa Bay: DE Obum Gwachum, Oregon State: Gwacham was recently activated off short-term IR for the Vipers, looking to add a little venom to their pass rush. They haven’t generated much pressure with their front four, so the addition of Gwacham should help.

St. Louis: DT Casey Sayles, Ohio: Sayles is a starting defensive tackle in the 4-3 defense run by Jay Hayes in St. Louis. He has accumulated four tackles and a sack in three games for a stingy defense that has given up just 15 points per game.

Seattle: DE Stansly Maponga, TCU: The former NFL 5th round pick, Maponga leads the Dragons defense from his starting position at left defensive end. To date, he has seven tackles, one QB hurry, and one tackle for loss. He seems to be heating up as the season goes along.

DC: LB James Vaughters, Stanford: The trade for Anthony Johnson netted DC a first-round pick in this phase, which does help ease the loss of Vaughters to the NFL. Vaughters bounced on-and-off the roster and practice squad of the Chicago Bears for the bulk of the 2019 season, then signed a reserve/futures contract at the end of the year.

Houston: DT Trenton Thompson, Georgia: This may go down as the worst first round pick of the 2020 XFL Draft. Thompson was waived by Houston at final cuts and was subsequently signed to Team Nine. The fact that we’re almost four weeks into the season and no other team has claimed him tells what kind of reach this was.

New York: LB Ben Heeney, Kansas: The oft-injured Heeney is looking to stay healthy for the XFL season to earn another NFL shot. He’s the starting MLB in New York’s 4-3 defense. He’s been a tackle machine, with 18 in three games, including three for loss and a QB hurry.

Dallas: DE Hau’oli Kikaha, Washington: Kikaha was a risky choice given his injury history; he made it through training camp and the first three games as one of Dallas’ starting outside linebackers. After six tackles, a sack, and a forced fumble during that span, Kikaha was placed on the reserve/retired list this week to attend to family issues, per his Instagram account.

Dallas: S Derron Smith, Fresno State: The former Cincinnati Bengals draft pick has found a home as the starting free safety in Dallas. His big-play impact hasn’t yet been felt, but he’s a steadying presence in the defensive backfield. He has ten tackles through three games.

New York: CB Jamar Summers, Connecticut: Summers has been arguably the top defensive back for New York, registering nine tackles, a fumble recovery, and a pass defensed. The 1-2 Guardians will lean on him as one of their defensive leaders to get them out of the funk they’re in.

Houston: CB Deji Olatoye, North Carolina A&T: One of the few first-round picks who is active but not in the starting lineup, Olatoye is the backup to Jeremiah Johnson at right cornerback. He has just one tackle in two games; in the third, he was a healthy inactive. Houston’s success on the season is more impressive given a couple of misses on first-round picks.

DC: CB Elijah Campbell, Northern Iowa: The starting left corner in the nation’s capital, Campbell has been active on defense and special teams so far this season. On D, he has six tackles and two passes defensed. On special teams, he has a blocked kick and another tackle.

LA: CB Jack Tocho, NC State: The second of three first-round safeties selected, Tocho may just be the best of the triumvirate. He has filled the stat sheet to the tune of eight tackles, one for loss, an interception, a pass defensed, two forced fumbles, and a fumble recovery. He played a big role in LA’s first victory, against DC on Sunday.

Seattle: CB Jhavonte Dean, Miami (FL): Dean was on the team’s minicamp roster and even had a write-up on his journey posted on XFL.com. However, it appears he never made it to training camp nor into the regular season.

St. Louis: S Herb Miller, FAU: Like Dean, Miller was on the St. Louis mini-camp roster, but apparently was not at training camp. The Battlehawks’ safeties haven’t missed much of a beat without Miller, as they’ve started NFL veteran Will Hill and potential future NFL draft pick Kenny Robinson to much success.

Tampa Bay: CB Arrion Springs, Oregon: The Vipers have been active in the trade market both before and during the season. Springs was traded to LA straight-up for fellow corner Jalen Collins on December 17. Springs is listed as a backup to Harlan Miller at one of the Wildcats’ corner spots. Even as a backup, he has nine tackles, an interception, and two passes defensed for Winston Moss’s defense.