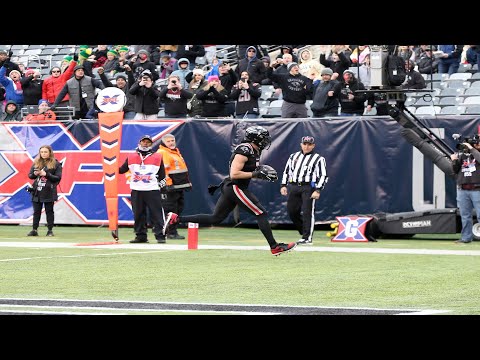 New York Guardians Wide receiver Colby Pearson grew up in Blackfoot, Idaho, where he played football for the Blackfoot High School Broncos. In his senior year he caught 77 passes for 1,246 yards and 22 touchdowns, enabling the Broncos to go 12-1, and win the 4A state title.

Pearson followed his stellar high school career by signing with the Cougars of Brigham Young University. In his senior year he led the team in touchdown receptions with four, and was second on the team in 38 receptions for 384 receiving yards.

In 2017, Pearson was signed by the Green Bay Packers as an undrafted free agent. Due to injuries he was waived on August 28, 2017. In December, he was re-signed to the practice squad, and later signed a reserve/future contract with the Packers on January 2, 2018.

On July 30, 2018, Pearson went to the Atlanta Falcons. Suffering another injury in training camp, he was waived with an injury settlement.

“Unfortunately, I’ve been having this this battle with the injury bug. I had two injuries when I was in Green Bay and then got injured again in the pre-season when I was in Atlanta,” Colby explained.

On draft day, Pearson followed the picks closely, but was disappointed that he never heard his name called. On day two of the draft, he went to the gym, just to take his mind off things.

“I was actually just training, because that first day it (the draft) came and I didn’t get a call from them. So, I was kind of bummed out. I was, I don’t know what the next step is,” Colby recalled.  “So, I had gone back to the gym to train like normal, and I think that’s when I got the call.”

Colby was surprised to get a call from the New York Guardians during the open phase of the draft. Things began to move quickly now that he had joined the Guardians organization.

As a Guardian, Colby went through a mini camp, a training camp, and endured cut-downs to gain a spot on the Guardians roster.

This was Colby Pearson’s journey to play pro football. Now, do you wonder where that long journey took him?

It took him to the New York Guardian’s opening game where he caught two passes for 44 yards and his first pro football touchdown.

Despite the career milestone, Pearson was modest in response. Instead of talking about his TD, he focused on pointing out that the Guardians offense still needed fine tuning.

“We were just happy to get out there first game of the year and come out with the W,” he said. “Execution wise, on offense we have little things to clean up and I think we’re going to have a really productive offense.”

After the Guardians came away with a win in their opening game, Pearson pointed out they are focusing on their next game against the DC Defenders.

Colby is right. There is never going to be a rest for the Guardians, since the short 10-week XFL regular season has no bye weeks. Every week, each team is involved in a new matchup.

When asked about the league’s slogan, “For the love of football,” Colby was quick to point out it was about players who are trying to make a statement.

“Every guy here in the XFL has his own story, and at some point things didn’t work out for them. I think, in order to play in the startup league, everyone’s had a kind of sacrifice, and it really goes to show that the players here really have a love for the game, and they feel like they have untold stories out there.”

We are happy to report that Colby Pearson’s story is now being told as a Guardian. We wish Colby all the best on the football field, with hope that he remains a healthy, productive wide receiver for the New York Guardians of the XFL.

Colby Pearson and the New York Guardians meet the DC Defenders in Washington on Sat 15-Feb-20 at 2PM ET on ABC.