By most accounts, the XFL had a successful week one re-debut. The quality of play was higher than many expected, the ratings were solid, crowds were rocking, and innovations were met with a thumbs-up from fans and analysts alike.

However, football is a competition and as positive as week one was, four teams did have to lose. One of those teams was the Tampa Bay Vipers, whose inaugural game went about as poorly as one could imagine, losing to the New York Guardians, 23-3.

The game was rife with miscues from the Vipers: penalties, defensive breakdowns, dropped passes and poor quarterback play permeated the playing field. “Our play today was unacceptable,” said Vipers Head Coach Marc Trestman, not mincing words in the post-game press conference. “When you have over 400 yards of offense and come up with three points…your play is just not acceptable.” 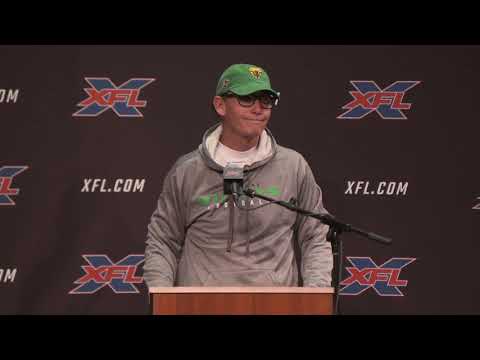 Tampa’s performance was one of the surprises of the weekend for a team thought to have the best chance to win the XFL Championship. The offense was able to move the ball down the field, but red zone woes did them in. They were 0-for-4 inside the 20-yard line, with only the XFL’s tiered extra point system keeping them in the game until late.
New York got on the board on their first drive, culminating in a Matt McGloin 1-yard TD dive. Tampa’s first drive ended at the Guardians six yard-line with an ill-advised Aaron Murray first-down prayer intended for Nick Truesdell that was intercepted in the end zone by Andrew Soroh of the Guardians. “If I don’t force a ball in the back of the end zone and throw it away [instead], it’s second down and five,” said Murray. “I have to be a little bit smarter in the red zone.”

A 45-yard strike from McGloin to Mekale McKay set up a Colby Pearson touchdown grab on the next play to put New York up by two scores in the second quarter. Tampa threatened again late in the second when they reached New York’s 27 yard-line, only for Murray to again throw an interception.

Tampa’s day was summed up when DT Ricky Walker was ejected for punching Guardians C Ian Silberman following a second quarter play. It reflected not only the frustration felt by the players, but also the undisciplined play that cost them throughout the game.

Though he played just one snap in the first half, the slash-like Quinton Flowers saw extended time in the second half at the QB position and seemed to give the Vipers a needed spark. He finished the game with 6.8 yards per carry on five totes while also connecting on a 37-yard pass to Daniel Williams.

With the score 17-0 in the third quarter, Trestman sent Andrew Franks out for a 23-yard field goal on 4th-and-goal from the five yard-line. It was a decision sure to be second-guessed even though Franks connected there after missing a 50-yarder earlier in the game. The game was all but put away early in the fourth when Jamar Summers returned a Truesdell fumble 13 yards for a touchdown.

Despite the sloppy play, the Vipers did put up nearly 400 yards of total offense, held the Guardians to just 45 yards rushing, and converted 47% of their third downs. Those are numbers to build on as they prepare for the Seattle Dragons on Saturday night. But until then, for the next six days, the entire team will no doubt have a bad taste in their mouth given the way results likely did not meet expectations for week one.