With the XFL kicking off on 8 February, we’d like to point out four things XFL fans would love to see happen in conjunction with the kickoff. Of course, innovative spring football is the topmost desire of all fans, and it seems  this is something they are about to receive. However, getting these four additional things to come to fruition would be the icing on the cake.

Vince McMahon has to go on the field to introduce the XFL. The previous time McMahon did this on 3 February 2001, at the XFL debut game between the NY/NJ Hitmen vs Las Vegas Outlaws at Sam Boyd Stadium in Las Vegas, remains an iconic moment of the the first XFL, and has actually become a meme for the league’s identity. 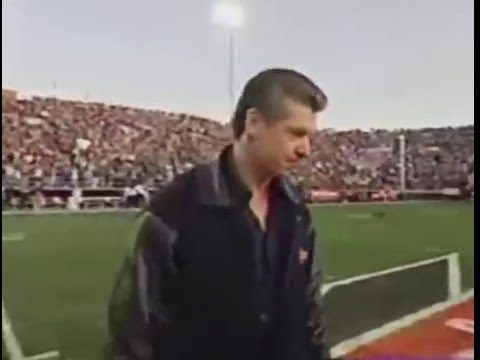 Of course, McMahon doesn’t have to hype the league the same way. He could easily talk about the two years of work Alpha Entertainment has done to build his new league.

However, he has to say, “This is the XFL!” in his signature gravelly voice. This part is mandatory.

The league needs to bring out some of the old XFL heroes. Players like Tommy Maddox, Rod Smart, Jeff Brohm and John Avery should be brought out to comment on the new league. This would serve to make a decent connection between the old league and new in a positive way.

Players like Maddox and Smart, who had great success in the NFL after their XFL playing time, would serve to point out that the XFL is about great football, and nothing else.

3. Make sure people know the “X” does not stand for “Xtreme”

The fact is that the “X” in XFL never really stood for anything, and that fact remains true in the 2020 version of the league.

History lesson: When the first incarnation of the league was envisioned, it was originally thought XFL would stand for “Xtreme Football League.” However, since there was already a league in formation with that name, for legal purposes the league decided that the “X” did not stand for anything.

However this did not stick.  Even a true XFL fan like Homer Simpson thought the “X” stood for “Xtreme.” In fact, this animated gif meme is often seen when people are referring to the XFL on social media.

So, the XFL needs to work hard to ensure that people know the “X” doesn’t stand for anything.

In a Sports Illustrated interview with XFL Commissioner Oliver Luck, the league’s name was discussed. In describing the origin of the league’s name, it was stated, “The F and the L act to indicate, if only indirectly, a football league. But the X is a variable. It could mean anything.”

Let’s go with that.

4. Someone needs to tell Homer Simpson the XFL is back 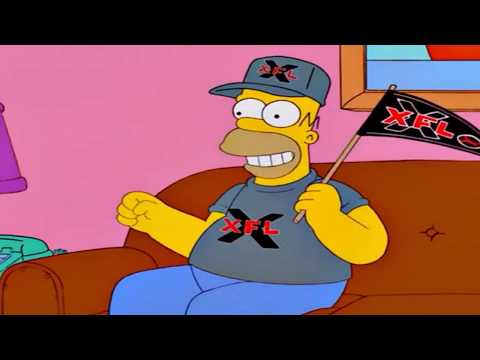 The last time the “XFL” was mentioned on “The Simpsons” was in the season 13 episode “The Old Man and the Key” (aired March 10, 2002), where Marge had to break bad news to Homer that the XFL had folded:

Marge:  Honey, I’ve got some bad news for you.
Homer: Not now, Marge. I’m waiting for the new XFL season! Who will win this year’s million-dollar game? Who? Who?
Marge: Honey…
Homer: (Making an X with his fingers) The “X” is for “Xtreme.”
Marge: There is no XFL this year. The league folded.
Homer: Who told you?
Marge: Last year’s MVP. He sweeps up toenails at the beauty parlor.

Don’t you think it’s high time that Marge tells Homer that his favorite football league is back? In fact, this would be a great way to promote the league, especially since memes based on this Simpsons clip are quite predominate on the web. Let’s create a new meme… “Homer is thrilled that the XFL is back!”

Maybe they could do an entire story line where Homer is excited to hear the XFL is returning, and he actually goes to an XFL game. Since The Simpsons is on Fox, a broadcast partner of the XFL, there is a chance such a crossover could actually be a reality.

It’s worthwhile to note, the XFL MVP Marge was referring to was Tommy Maddox, and he actually did not have to “sweep up toenails” after the XFL folded. Instead, he spent three years with the Pittsburgh Steelers, the first two as their starting quarterback.