“It was a lot harder to find the sweet spot on the ball for us to kick to get a good end over end ball.” 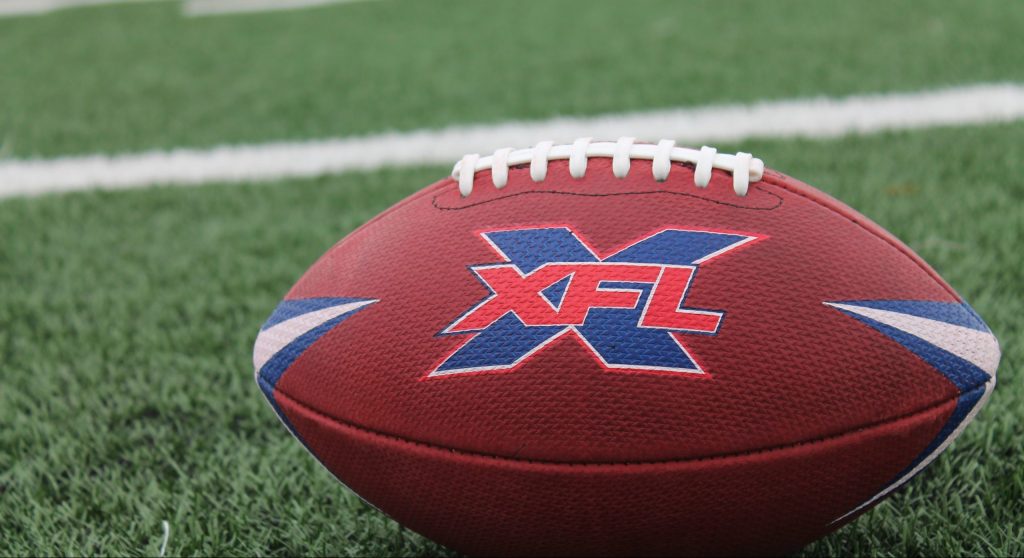 In late November 2019, the XFL showcased their new footballs. Manufactured by Team Issue in Dallas, Texas, the balls were designed to be one of the most innovative balls to date.

There were eight different looks to match each team’s primary color scheme. A ninth version of the XFL football was added later, to serve “Team Nine,” the XFL’s practice squad which was located in Houston.

The footballs feature an “X-Pebble” grip technology designed to help players control the ball with a feel that enables a tight spin on throws, and also allows ball carriers to enhance their ball security.

The points of each football are wrapped with ‘X’ marks in white and the team’s primary color. This design allows receivers to track the ball easily.

The general reaction was that the final version of the XFL footballs were pretty snazzy.

At the time of the ball’s unveiling, XFL Director of Football Operations Sam Schwartzstein remarked that his role was, “to make sure that we’re playing a highest-level football we possibly can, and that all starts with the tools we use, and with the football.”

The league also pointed out how they had tested different versions of the ball, and had “countless interactions with quarterbacks and receivers, and asked them what they liked and what they didn’t like.”

Jones recalled the first time he used the ball. “It felt a lot different,” he said. “The more you break it in, the more it feels like a normal-pebbled football. So, the ball is great.”

Jones may have said the balls “felt different,” and he pointed out that you had to break-in the ball, however the balls were never the favorite of XFL kickers.

Kickers also said the balls “felt different,” but to them there was more.

In a recent XFL Xtra podcast, Seattle Dragons placekicker Ernesto Lacayo mentioned how the ball was a challenge to kick.

“Kicking and punting, even the snappers didn’t like the football. It was definitely difficult… a little bit different feel on the ball,” Lacayo said.

When asked to explain what was different about the ball, Lacayo indicated it may be the smaller girth of the XFL football.

“We were looking at it actually from the NFL to an XFL ball, the middle of the ball is a lot more smaller in diameter,” Lacayo said. “It had a big effect in our field goals. It was a lot harder to find the sweet spot on the ball for us to kick to get a good end over end ball.”

“The punters were the first ones to really complain about it,” Lacayo added. “All these punters that we had in the XFL were great punters as far as hang time when it comes to the NFL ball, but for some reason, they were not able to get their foot completely on that ball to get the hang time that they desired.”

According to Lacayo, many of the league’s “specialists” would often compare notes on the ball, as they collectively had the same thought that “these balls are interesting.”

When asked whether the XFL ball was harder to kick, DC Defenders placekicker Tyler Rausa agreed.

“It was,” Rausa said. “It really just took away distance more than anything. Smaller sweet spot to hit. Leather wasn’t fun to break in. Much less distance than the NFL ‘The Duke’ ball.”

For the sake of the kickers, both Lacayo and Rausa hoped the XFL might look to make changes to the ball in the future.

St. Louis BattleHawks placekicker Taylor Russolino pointed out that he also found the ball hard to kick, and contended that he had to adapt to the ball and overcome its shortcomings.

“The sweet spot was a little more difficult to hit,” Russolino said. “But after some time, we began getting used to them, and once they were broken in some, the balls were money!”

Apparently, a break-in process was necessary to get performance out of the ball.

“Our equipment guys would make them particular to how we wanted them, and they did a phenomenal job,” Russolino explained.

Tyler Rausa was far more descriptive as to how the DC Defenders equipment staff would break in the balls.

“We would pump them up halfway. Rub them on the track around our field. Oil them. Jump on them, put our cleats on them. Abuse them as much as possible to break in that leather,” Rausa said.

There is a strange irony here, as anyone who recalls how the original XFL balls were criticized because of the extensive shower and sandpaper break-in procedure required. The truth remains that any football needs to be broken in before being put into game play. It just seems the XFL balls are harder to break-in than other balls.

When asked whether he had any difficulty handling the ball, New York Guardians long snapper Scott Daly indicated the ball was narrower, and required a small adjustment.

“It wasn’t a huge adjustment,” Daly said. “They were a little more narrow than the NFL Wilson football but after a few practices they felt great to snap.”

Still, it was the lack of distance they could get out of the ball that vexed XFL kickers throughout the 2020 season. Lacayo pointed out that he and fellow kickers have recently been training with NFL balls, and they are “just crushing the ball.” However, he still likes to train with XFL balls.

“I have a couple of extra XFL balls and I train with them every time now. So, I’m a lot more used to it than when I got to Seattle, where I only had literally four days to get used to it.”