Carlos Thompson, a wide receiver who hails from Houston, Texas, is best known as being featured as a player for the Independence Community College Pirates on season three of the Netflix series “Last Chance U”.

In 2017, as Carlos and his teammates were preparing for the football season, Netflix camera crews showed up. “It was just crazy,” Carlos said. “One day they just showed up with a bunch of trucks and everything and people started hopping out with cameras.”

According to Carlos, that event started a season where the team had cameras following them around almost 24/7.

“We had cameras following us just about every day, every second of the day. If you were waking up out of your room, or going to class, practice, anything like that, there was a camera,” Carlos explained. “It took some getting used to, you know, being on camera and just walking around having microphones and people around at all times.”

When asked about the gritty nature of the show, Carlos felt it showed exactly what it was like to be on a Junior College football team. “It shows the ups and the downs of JUCO, just how it really does get with just having to deal with certain struggles that you don’t have to deal with at universities.” 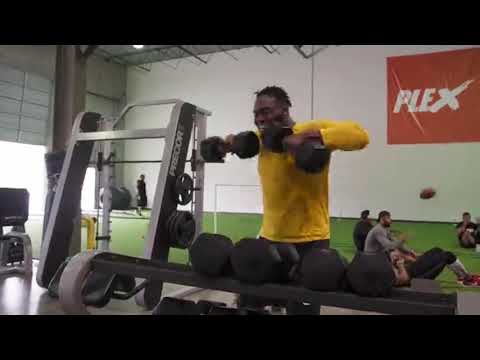 After his time at Independence, Carlos played with the Missouri Western State Griffons, where he was enthusiastic about his experience.

After one year at Missouri Western State, Carlos decided to forego his senior season and declared for the 2019 NFL draft.

“I was ready just to take that next step in my life, and chase a dream that I had been wanting ever since I was a small kid.”

Unfortunately, Carlos is still waiting to fulfil his dream to play professional football. However, after working out in a Spring League showcase, the XFL is now interested in his services. Carlos hopes to be selected by a team in next week’s XFL draft. He is confident he will be an asset to whatever team chooses him to be a part of their roster.

“Whatever team I end up on, I’m going to be not only just a great football player, but a great player in the community, and a great teammate, and a hard worker,” Carlos said. “I’m going to be somebody who can come in and just go to work and be a great presence in the community, just showing the children and all the fans and everybody that I care about the team and the city.”

When asked about the specific rules of the XFL, and the plans for a shortened play clock, Carlos revealed that he was part of a Spring League squad that helped test the XFL rules.

“I’ve actually gotten to experience the shortened clock just a little at the Spring League showcase. They were implementing some of the XFL rules,” Carlos explained. “You’re going to have to be in top shape, because you’re going to run one play and get right back on the line and be ready to go.”

Soon, at the XFL draft, we will see just how interested the XFL is about getting Carlos on a roster.

Carlos has the skills, he has the energy, and he also has confidence. When asked if we will witness him catching long balls for the XFL this February, he responded, “Yes sir we will. Yes sir.”