Now that the XFL is starting to sign players, beginning with the recent signing of quarterback Landry Jones, other signings won’t be too far away.

If there is one potential XFL player signing that is highly anticipated among fans, it is Johnny Manziel.

We all know Manziel has had well documented problems.  We might be able to summarize his football career by saying, shear brilliance, followed by poor choices and bad luck. First, being his brilliant college career and well deserved Heisman Trophy, second, his NFL career with the Browns that went south, mainly because of poor personal choices, and third, his resurrection in the AAF that was cut short when the league folded like a cheap chair at the end of a party.

You may have noticed that we didn’t mention Manziel’s CFL career… mainly because we don’t really know what happened there. Last winter, after playing one season with the Canadian league, Manziel was cut loose under a veil of secrecy. The CFL even went as far as to say he had been “barred from the league.” It may have been another example of “poor choices,” but we cannot be sure. 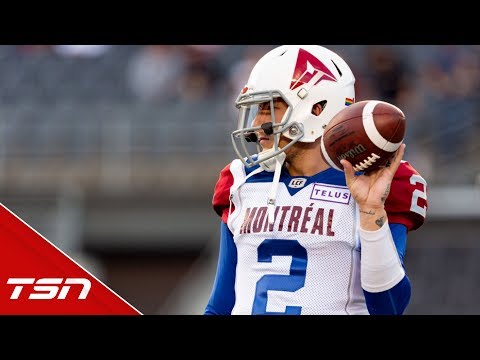 That being said, when it comes to considering Manziel for the XFL, the league should start by looking back at his CFL career.

Manziel was brought into the Hamilton Tiger Cats training camp in the spring of 2018. Hamilton head coach June Jones had been a big fan of Manziel’s, and had followed his career since he had switched from receiver to quarterback at Tivy High School in Kerrville, TX.

“I’ve wanted him since he was a sophomore in high school,” Jones said to reporters at the time. “I think I was the first to offer him a scholarship.”

Later, Jones remained a big fan when he coached at Southern Methodist University, and Manziel starred for rival Texas A&M, eventually leading to a Heisman Trophy for the young player. Finally, when Jones was head coach of the CFL’s Hamilton franchise, he got the chance to coach Manziel in person, when he was signed to a two-year contract with the team.  It was also understood that the contract included stipulations that would help Manziel repair his off-field image and resurrect his football career.

It should be noted that Canadian football fans had great interest in the career of “Johnny Football,” and awaited his debut with marked anticipation.  Manziel’s hiring created a buzz. However, when the season began, Manziel held the position of second-string quarterback behind the Ti-Cats star Jeremiah Masoli. With little playing time on the table it was reported that Manziel was unhappy. Soon, he was traded to the Montreal Alouettes where he got the chance as a starter.

There was plenty of interest in Manziel once he hit the field in Montreal, with hopeful fans flocking to Percival Molson Stadium to view the event. Most fans were likely wondering whether it would be a train wreck, but still hoping they would witness the resurrection of a once-great football genius. What they got was a lackluster performance, and a bad home team loss. But, they came out to see it, didn’t they?

Flash forward to today. Manziel is again looking for a football league, and the XFL is looking for good players. The fans still seem to have faith in good old “Johnny Football” and would love to witness him throwing an XFL ball. For the same reason fans flocked to Montreal’s stadium, they will also show up to see Manziel if he starts in an XFL game. They will come to see someone who is still a star in their eyes, and dream of witnessing the game where Manziel’s train wreck of a career would be put back on the rails.

Having Manziel as a starting quarterback would help the XFL create a buzz, especially if he was placed in the Houston franchise where he could be reunited with coach June Jones, and once again throwing footballs under the bright, broad Texas sky. There could be nothing more poetic than this scenario, and the XFL needs to consider bringing it to reality.

Will the league take a chance on Manziel, even after he was barred by the CFL? Of course, we do not know the reason he was cut by the Canadian league, but the AAF took a chance on him and that seemed to work out. Keep in mind that the XFL presently has personnel who worked in the CFL last season, and they might know enough about the situation to help XFL HQ make a wise choice on the matter.

Either way, the fans want to see Manziel get another chance. In the past the XFL has called itself a league of “second chances.”  Doesn’t this seem like a perfect match?

5 comments on “Will the XFL become a home for the player formerly known as Johnny Football?”