ORLANDO 29, BIRMINGHAM 24 BIRMINGHAM, Alabama (Ticker) — The Birmingham Thunderbolts will not be making any noise in the XFL playoffs. The Thunderbolts squandered an eight-point lead in the fourth and became the XFL’s first team to be eliminated from playoff contention with a 29-24 loss to the Orlando Rage. In a matchup of the … Read more

Enforcers 23, Hitmen 18 EAST RUTHERFORD, N.J. (AP) – Kevin McDougal returned from a neck injury and threw a 19-yard touchdown pass to Willy Tate with 1:41 to play to give the Chicago Enforcers a 23-18 victory over the New York-New Jersey Hitmen on Saturday night in the XFL. McDougal also threw touchdown passes of 9 … Read more

By Bamaslammer – Bolts Team Reporter Birmingham – (30 March 2001) — Your tired, you’ve been driving for hours. You pull off the highway to get some gas and something to drink. As your gassing your vehicle a tan and crème RV pulls up and a middle age man with a crew cut jumps out and … Read more

New York – (30 March 2001) — Not often does a head coach stick his neck out and guarantee a victory for his team. Rusty Tillman has been doing just that all week ever since his team lost to the Rage 17-12 last Sunday in Orlando. Tillman is one of the league’s most maligned coaches and … Read more

Orlando – (29 March 2001) — The Orlando Rage remain the only unbeaten home team in the XFL. This week though, they play on the road. The Orlando Rage (7-1) are heading to Birmingham (2-6) to play the last place Bolts. The Rage have clinched a first-round home playoff game after capturing the Eastern Division title … Read more

New York – (29 March 2001) — That’s what week 9 and week 10 represent in The XFL. Two teams, Orlando and LA have clinched playoff spots. Two playoff spots remain with only two weeks remaining. Six teams are battling for 2 spots. These last 2 weeks of the inaugural XFL season are the playoffs … Read more

By Bob Williams – Enforcers Team Reporter Chicago – (27 March 2001) — The Enforcers defense, with the exception of late in the game, played very poorly yet they were able to shut out Birmingham Sunday night. Birmingham drove the length of the field three straight times in the first half, but in this battle … Read more

In the past 42 hours XFLboard.com has received 3,966 counting votes for XFL Players of the Week. The votes have been tabulated and here are the results: XFL Offensive Player of the Week John Avery Running Back Chicago Enforcers 45.2% of Fan Vote Avery exploded on the Birmingham defense for an XFL-record 180 yards on … Read more 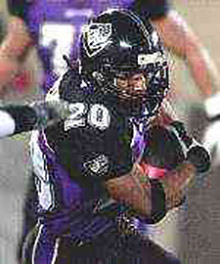 By Troy Pringle – Enforcers Team Reporter Chicago — (26 March 2001) – For the past several weeks, everyone, including me, has been ragging the Chicago defense for sloppy play. They aren’t playing tight enough coverage. Offenses are passing all over the Enforcers “D”. Does this make us bad fans? No. In a league that the … Read more

By Sonny Sanders – Bolts Team Reporter The Birmingham Bolts remind me of an episode of “I Love Lucy”. The episode that I’m referring to has Lucy and Ethel working at a chocolate factory wrapping chocolates. Everything is going along smooth at first but then all hell breaks loose and in the end Lucy and … Read more