By Sonny Sanders – XFLBoard.com Birmingham – (30 January 2001) — There are only a few days left before the XFL season kicks off in Birmingham. Underneath all of the college recruiting talk lies anticipation in football fans. College football has been over for a month and the NFL (No Fun League) has once again displayed … Read more

By Madd Max (30 January 2001) – With the incredible amount of success that the NY/NJ area has had this past year in sports, can the Hitmen attract the fan base they will need to survive? With the success of the Yankees, Mets, Devils and Giants, is there enough adrenaline left in New York/New Jersey area … Read more

(30 January 2001) — In a press conference held on Tuesday, Chairman of NBC Sports, Dick Ebersol, started with “the FUN starts on Saturday!” XFL will kick off it’s first season on Saturday 3 February with the NY/NJ Hitmen at the Las Vegas Outlaws live from Sam Boyd Stadium. The best part is, the game … Read more

Leave one Roster spot open for CFL star WR (January 29, 2000) – The San Francisco Demons, all 45 players strong, made a triumphant return to the Bay Area Sunday and will begin preparation for their XFL season opener Tuesday morning at Diablo Valley College. To reduce its roster to the mandated 38 active players and … Read more

By Bamaslammer – XFLBoard.com Birmingham – (24 January 2001) – This week I had an opportunity to sit down with Tim Berryman, the General Manager of the Birmingham Thunderbolts, to ask him some questions about the league and the Bolts in general. Tim is clearly in high demand right now but he was patient and … Read more

By MaddMax – XFLBoard.com Reporter (23 January 2001) – When the XFL announced that Memphis would be one of their inaugural cities, a name had to be chosen that would fit that community. Some may say that the name “Maniax” was chosen solely for the purpose of portraying the WWF-style of toughness and crazed behavior. Nobody really … Read more 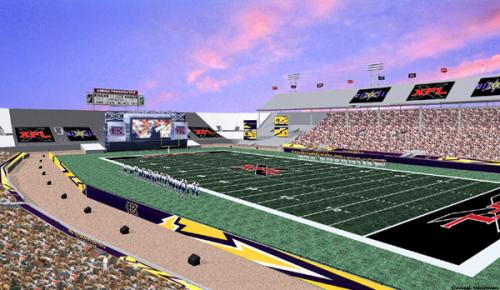 Birmingham – (23 January 2001) – The XFL has been telling us that they will make our football experience better than the way we were accustomed. This was suppose to make us forget the NFL. It’s working. Marketing of the league has been ongoing since the XFL was first announced. The latest marketing scheme we heard … Read more